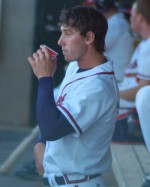 I’m all for redemption and working past self-inflicted wounds. And that seems to be the case with Jordan “the Juice” Schafer, once a top prospect for the Atlanta Braves who was knocked off track this year with a 50-game HGH-related suspension.

He’s playing again and has emerged from a prolonged slump that started when he returned from the suspension. The Atlanta Journal-Constitution featured a lengthy Q&A with Schafer over the weekend. But it sheds little light — well, none — on the suspension nor does Schafer provide an explanation about what happened.

He and his father have said it was all a misunderstanding in previous press reports. But Schafer still hasn’t come clean. For that, I’ll continue to hold a grudge against the sexy outfielder with the boyish good looks.

Q. What was it like when you came back from the suspension? What did you have to deal with?

A. It was a variety of things. I asked my teammates: ‘I’m sorry guys, I wasn’t here. I still followed you guys. I’d really like it if you guys would support me because I know I’m going to get a lot of stuff especially when we go on the road.’ They were really good with that. The fans kill me all the time. That’s to be expected. They’re going to say what they want. Two nights ago I hit two home runs. In my fourth at-bat, I was on deck and the fans were still killing me.