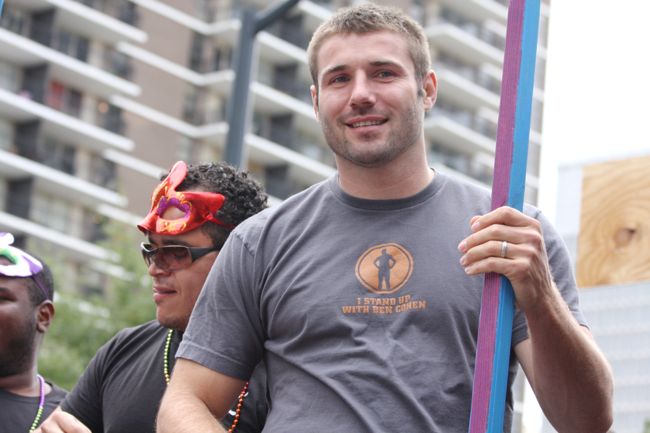 Rugby stud Ben Cohen is making the most of his ties to gay Atlanta this month. The newest item on his gay agenda is at Out in the Stands for LGBT Braves fans on June 27 to benefit his StandUp Foundation. Three ticket packages are available for Out in the Stands, which returns after of Georgia Equality supporters descended on Turner Field (view photos) back in September to help smooth over that nasty anti-gay rant by a Braves coach. They continue to make up for it by being the first Major League Baseball team to partner with Cohen's anti-bullying foundation. If you want to go big at the game, enjoy it from a catered party suite with Cohen for $200. $35 buys you an outfield ticket plus a big gay patio party, or $20 gets you into the party plus Upper Box seats. All of them come with drink vouchers, and every ticket sold benefits Cohen’s Atlanta-based StandUp Foundation against bullying. Get yours by contacting the Braves’ Stacey Nicely at 404-614-1325 or {[email protected]" title="reserve Out in the Stands tickets via email."} The whole deal is just a continuation of Cohen’s love affair with gay Atlanta. Don’t forget he’ll be the special guest at Monday's “Legalize Gay” screening with Out On Film and Atlanta Pride. All that comes after Cohen tapped Atlanta for the StandUp Foundation, hung out at Atlanta Pride, downed a few pints with his ATL gays and hit the pitch with our own Bingham Cup victors the Atlanta Bucks.