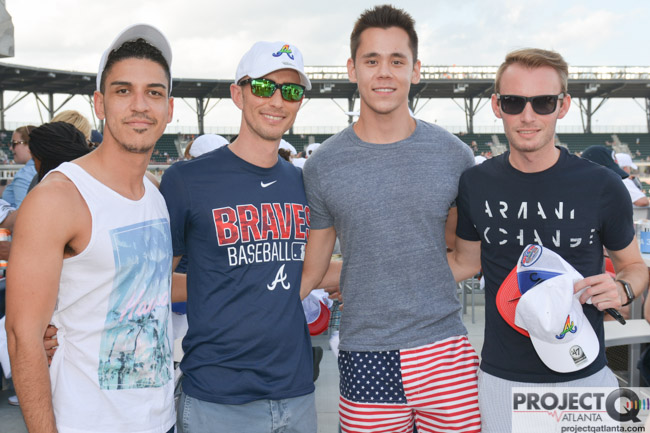 The Atlanta Braves – and for the first time their Triple-A affiliate Gwinnett Stripers – will celebrate Stonewall Month with Pride Night, pregame parties, snazzy souvenirs, fireworks and donations to LGBT charities.

“This year marks our ninth Braves Pride Night and every season the attendance grows,” Adam Zimmerman, senior vice president of marketing for the Braves, told Project Q Atlanta. “It's always a fun and important night for us to host and we look forward to doing so again on June 14.”

For the Stripers, Pride Night is an opportunity to celebrate the team's LGBTQ fans, according to Adam English, vice president and general manager for the team.

“We feel strongly that we do everything we can to ensure that Coolray Field is a welcoming environment for all people,” English said in a prepared statement. “We are proud to partner with the nationwide MiLB Pride initiative, to celebrate the proud LGBTQ of the Atlanta area. We want fans from the LGBTQ community to know that Stripers baseball is for everyone, and that Coolray Field will always be a safe and respectful place for anyone to enjoy a game.”

The Braves’ Pride Night in its early years was a much more low-key affair, with a pregame gathering attracting just a few dozen attendees at Turner Field. But the event has grown exponentially since then, with hundreds of LGBTQ fans expected at SunTrust Park for this year's event.

The pregame party takes place at the Coca-Cola Roxy for the second year, featuring DJ Kimber from Nonsense ATL.

For those anticipating the cute Braves caps in rainbow colors to take home again this year, be aware that the team has something new up its sleeve. Guests will get a t-shirt with the Braves logo in rainbows, which they’ll pick up at the pregame party. For the Stripers, fans will receive a Rainbow Stripers cap.

Steps away from the Roxy is SunTrust Park, where guests can head to their seats in the Home Run Porch in the outfield or go up to the Xfinity Rooftop Lounge in right field. The lounge features cabanas, tailgating games, an indoor lounge and plenty of bars.

The Braves take on the Philadelphia Phillies, and guests are welcome to stick around for Friday Night Fireworks after the game.

For the Stripers, Pride Night includes live music during pre-game festivities, a representative from Positive Impact Health Center throwing out the honorary first pitch, a rainbow flag flying at the stadium, rainbow-colored Pride Tape on bats and the wrists of Stripers players, preferred pronouns on the nametags of staff members and post-game fireworks. The Stripers play the Durham Bulls.

Check out pics from last year's Pride Night with the Braves, and get your tickets to this year's festivities. Tickets are $45 and a $3 donation will be made to Lost N Found Youth for each ticket sold.

Tickets to Pride Night with the Stripers are $20 and a portion of each ticket will benefit Positive Impact Health Centers.