Atlanta boyfriends get life in prison for Molotov cocktail murders 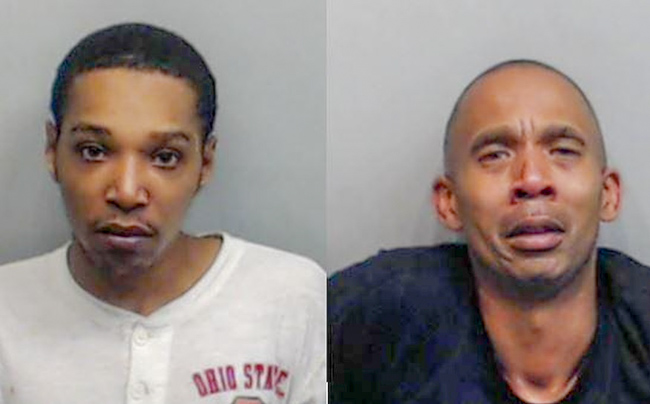 A man and his boyfriend were convicted of firebombing a house and murdering two people they believed were encroaching on their drug trade in northwest Atlanta.

Kendrick Ogletree, 45, asked his boyfriend, Mark Kirkland, 36, to burn a neighbor’s house in 2015 using a Molotov cocktail. Ogletree (photo right) and Kirkland (photo left) were regularly involved in fights with neighbors who were related to people selling crack cocaine in the area, according to a press release from Fulton County District Attorney Paul Howard.

Ogletree allegedly sold heroin out of his house on Jett Street and believed the crack cocaine sales were cutting into his profits, prosecutors said.

Kirkland knocked on the door of the neighbors’ house early on the morning of Nov. 10, 2015 and threw a Molotov cocktail inside once Debra Morris, 46, answered. Four others who lived inside the boarding house escaped. Morris and another resident, DeAngelo Barbary, 36, did not.

“In the end, Morris and Barbary died as a result of the fire from the Molotov cocktail and neither one had anything to do with the drug-related disputes,” according to the press release.

Several witnesses who were in the area moments before the fire identified Kirkland as the one who threw the Molotov cocktail into the home.