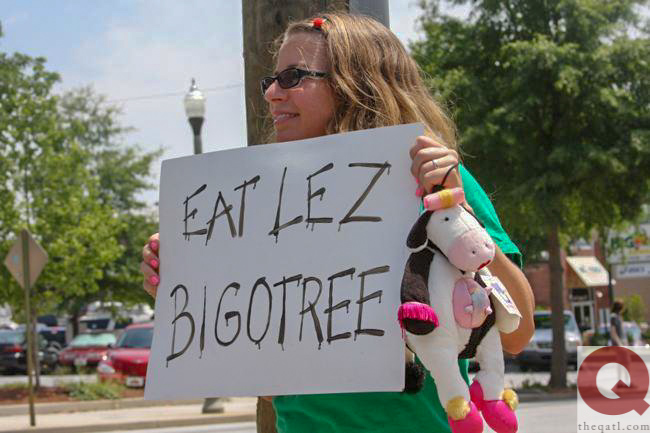 The Atlanta Beltline announced a monthlong partnership with Chick-fil-A on Monday, igniting a flood of criticism on social media about the Atlanta-based restaurant chain’s anti-LGBTQ history.

The Beltline is partnering with the “amazing hometown favorite” throughout March for its Bites on the Beltline program, according to its Instagram post. The Chick-fil-A on Bill Kennedy Way in Glenwood Park will donate 10 percent of its Monday through Wednesday lunch sales to the Atlanta Beltline Partnership, which raises money and awareness for the Beltline.

“This just leaves us with one thing more to say – Eat More Chikin’, y’all (for lunch, M-W during March)! #eatmorechikin,” according to the post.

A spokesperson for the Beltline did not respond to Project Q’s questions about the partnership.

Chick-fil-A said it cut off funding to the Salvation Army and the Fellowship of Christian Athletes in November after years of protests and bad press about the groups’ anti-LGBTQ ways. It has donated millions to the groups over the years.

But the chain’s partnership with another anti-LGBTQ group continues. Fundamentalist Christian group Focus on the Family runs marriage workshops out of WinShape Retreat, the chain’s foundation based in Rome, Ga., according to its website.

A GLAAD spokesperson said in November that Chick-fil-A needs to be more transparent about its “deep ties to organizations like Focus on the Family, which exist purely to harm LGBTQ people and families.”

Our #BitesontheBeltLine partner for March is our amazing hometown favorite, @chickfila! The awesome folks at @cfaglenwood are big BeltLine fans and they’re donating 10% of lunch sales Monday – Wednesday (10:30 am – 2:00 pm) during March to the Atlanta BeltLine Partnership. Stop in starting today during those times and enjoy a chicken sandwich, some nuggets, a tasty salad – any of their awesome menu items – and know that a portion of your spend will benefit the Partnership. Again, this is the Glenwood Place location only. . This just leaves us with one thing more to say – Eat More Chikin’, y’all (for lunch, M-W during March)! #eatmorechikin