Atlanta Beat 2.0: Women’s soccer is back 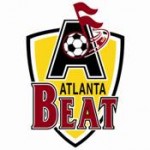 Okay, ladies. You get another one.

City boosters and women’s soccer officials joined together Thursday morning to offer you this: the Atlanta Beat. The team will hit the field in 2010 as the ninth franchise in Women’s Professional Soccer, joining the WNBA’s Atlanta Dream as the city’s only women’s pro teams.

Lesbians — and even a few gay men — rejoiced when the Dream came to Atlanta last year, packing the stands even as the expansion team added loss after loss throughout the season. Will lesbians back the Beat? We’ll see.

“We will feature the highest level of women’s soccer in the world and it is our goal to be entertaining, exciting and affordable for fans,” Beat owner Fitz Johnson says in a press release. “We feel the new team name, the Atlanta Beat, embraces our city’s past support of a professional women’s soccer team. Our logo and colors are distinct and vibrant, representing the flavor of the warmth, and energy of this city. There is no question that a WPS franchise will diversify and add to Atlanta’s robust professional sports community.”

The team will sport Ferrari red and gold as its colors. The Beat have been here before, as has women’s pro soccer. Despite the Beat reaching the playoffs in each of the Women’s United Soccer Association’s three seasons, fans didn’t quite take to the concept. The league folded in 2003.

But the new league, which opened play in March, hopes to change that with more modest expectations — attendance goals are in the 4,000 to 6,000 range — and slower growth.

“We are excited and proud to add Atlanta as our ninth WPS franchise for 2010 and to have Fitz Johnson, who is such a passionate and dynamic businessman, as an owner in our growing league,” WPS Commissioner Tonya Antonucci, says in the release. “Atlanta is a soccer hotbed with its numerous youth leagues and tournaments, and the region has played host to some big time women’s soccer events over the years including the Olympics and WUSA championship games.”