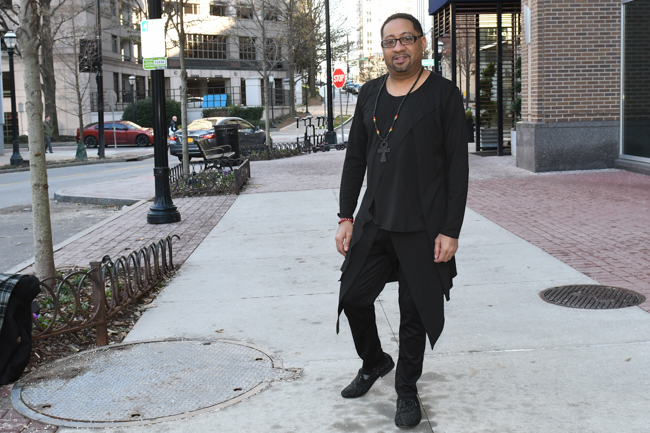 Timothy Keys is out with his debut book I Don't Want To Be That!— an autobiographical look into the world of a black gay man in the South.

In preparation for one of his roll-out events scheduled for My Sister’s Room next week,  Keys talks with Q about his motivations for writing the book, what he learned about himself, and who he would pick to play him in a movie adaptation.

What motivated you to write “I Don’t Want To Be That”?

I am good friends with Shunda Brown, Author of Do Something New, and New York Times bestselling author JL King. Both of them were an inspiration.

JL kept announcing his publication reassignment. That's when my wheels began to turn. I mentioned to my mother the idea of me writing a book, and the excitement in her voice was enough to get me started.

I began to bounce this crazy idea around to friends and coworkers whom all shared the same response: “Start writing!” So I did.

Writing a memoir can be eye-opening. What did you learn in the process?

This journey really taught me that after 37 years of living, the saying is true: “You can do anything you put your mind to.” I learned that writing came naturally to me and is a form of therapy.

It opened my eyes to the strong man inside of me, the one I don't see just by looking in the mirror. The making of this memoir also revealed I have positioned myself around exactly who I am supposed to be surrounded by at this phase in my life.

We hear you have plans to turn the book into a stage play?

That plan is on the backburner. My team and I decided the book I Don't Want To Be That! should be the primary focus for at least a year. We are currently working on branding the book and myself as the author, planning book signings throughout the city of Atlanta and hope to kick off a book tour in March in my hometown of Baton Rouge, La. Stay tuned!

If you could pick the actor to play you in a movie version of the book, who would it be?

Mmm…not because he is handsome, or because I have a crush on him and would love to work with him. Not even the fact that we met after one of his concerts and he is very funny and down to earth. I would have to choose Jussie Smollett, the singer and actor from Empire. He is a proud, out man of color, and I am sure he, as well as many, can and will relate to something in my book.

What advice would you give other first-time authors?

Start writing! Keep a paper and pen with you at all times. When a thought, memory or idea pops into that little head of yours, write it down. Revisit it later, and you will witness the story come to life before your eyes.

Don't give up! Assure you have a support system and accountability buddies that believe in you and your vision. Once you have a well-written manuscript, don't be cheap with the book cover or your editor. If I can do it, you can also — remember, your story isn't for you.

Timothy Keys reads from and signs I Don't Want To Be That! on Wednesday, Feb. 20 at My Sister’s Room, 7 p.m.

This interview originally appeared in Q magazine. Read the full issue below.

Pick up a new edition of Q magazine each week at queer and LGBTQ-friendly venues around Atlanta.