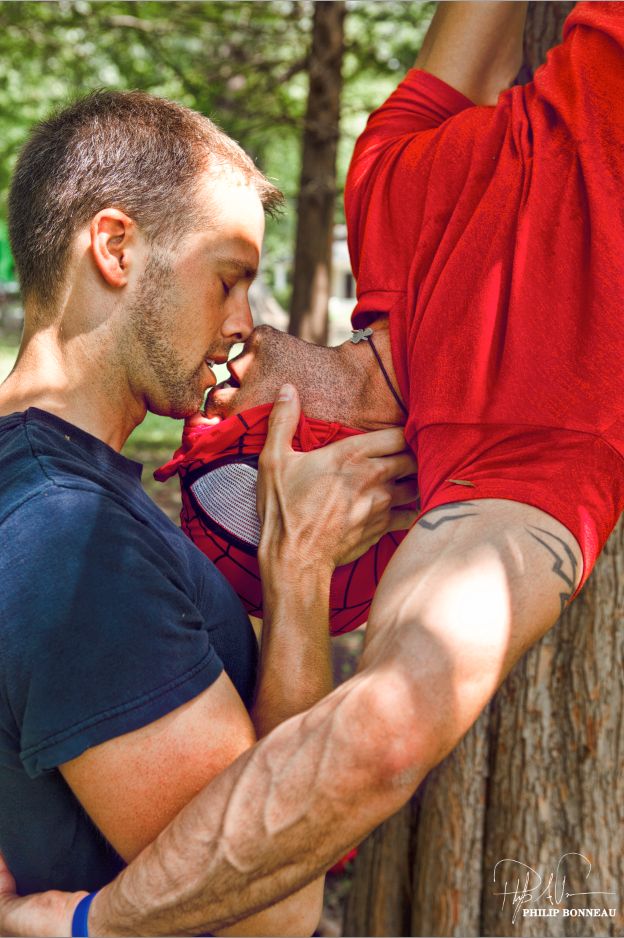 On Sunday, Bonneau made good on an idea he's had for nearly two years: Transforming the upside down kiss that Spiderman (Toby Maguire) shares with Mary Jane (Kirsten Dunst) in "Spider-Man" in 2002 into something with gay flair. The idea hadn't yet made its way into Bonneau's popular "Heroes + Villains" series. But with the upcoming gay marriage of former roommate Dan Thrailkill and Joe Cianciolo, Bonneau saw his chance.

"When you think of all the great kissing scenes of the last 10-15 years there are very few that just stick in the mind of pop culture," Bonneau says. "I'd say at the forefront of those is the Leo/Kate kiss in 'Titanic,' personally for me the Jake/Heath kiss from 'Brokeback' and probably more than either of those is the upside down Spiderman kiss from the first 'Spider-Man.' To me there could not of been a more unique passionate kiss than that that has resonated throughout my warped little mind."

And within hours of sharing the image on Facebook, it's gone viral. Hundreds of likes and shares on Facebook, record views for one of his images on Flickr and more than 1,500 shares on Tumblr.

"I think any artist wants to have work connect with people like that," he says. "I've seen in just 24 hours this image go more viral than any other works I have done outside of my Uhura shot. It's been viewed three times as much of my former most popular image that has been on my site for three years and has gone viral across Tumblr, Twitter and onto various other Facebook pages. All within 24 hours and it is not stopping."

For Bonneau, the image is more than a wedding present for Thrailkill and Cianciolo. It's a powerful statement as the Supreme Court is poised to issue rulings on two gay marriage cases.

"So with their wedding weeks away ... it was finally time to shoot the image. Definitely as a wedding gift but also because I believe the more non-exploitative images of the LGBTQ community that are out there make a difference in the general population's acceptance of us," Bonneau says.

Thrailkill and Cianciolo marry in a July 6 ceremony at Saint Mark UMC in Midtown. Blogger Matt Rogers, a college friend of Thrailkill's, has been exploring the buildup to their marriage and sharing insights from the couple on relationships, marriage and how they got this far.

But how did it happen? How did they meet, fall in love, and form a faithful relationship in a culture that often encourages immediate sex with as many people as you want at the expense of the slow, tough work of building an enduring life with just one person?

Joe says he was always a romantic at heart. “I’ve always had pretty traditional ideas about relationships, having grown up in the Catholic Church, so I knew I wanted a partner for life.”

Joe first saw Dan tagged in someone else’s picture on Facebook and wasted no time getting in touch. “I had a rule at the time that if I found a guy attractive, “ Joe says, “I would let him know. He deserved that rather than having me simply stalk him online. So, I messaged Dan.”

“And I responded pretty quickly!” Dan interjects, as they look at each other and smile. They have that same blissful glow about them that I as a pastor used to see in many of the engaged straight couples in my church.

After an exchange of messages and a long phone call one night, they decided to go on a date.

When he's not recasting iconic movie kisses and superheroes, Bonneau is preparing for his next show. But Ugly Simple Truths on July 19 takes a darker turn.

"It is a very emotionally intense show. It has tasked people to face their demons, tell their stories of struggle, addictions, relationships, loss and internal battles as well as interpret them through the use of black light photography. The intent of the series is to not only open up the discussion on things rarely talked about, but a chance to showcase to others that may be going through similar things in their life that they are never alone, and someone will always be willing to listen and help if you need it," he says.