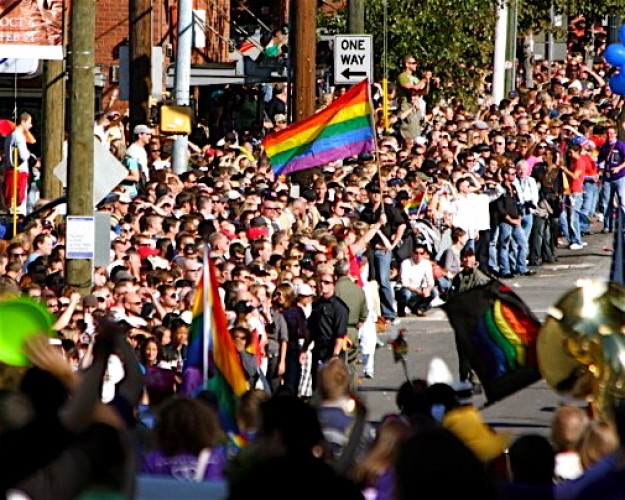 There’s a lot for Atlanta gays to be proud of, Atlanta Pride is one of them, and the world should and does take note. But there’s a hidden gotcha in CNN’s "Best picks around the world celebrating Pride." We’re happy that Atlanta makes so many national and international gay lists – even if the reports can’t get their facts straight year, after year, after year and list, after list, after list. So overall, it’s great that CNN tapped a gay travel source and includes Atlanta Pride among just five of the world’s “best Prides.” Until you actually read the article. Can we take full credit when some of the world’s best Pride celebrations are left out because they “might be too overwhelming,” according to Ed Salvato, who is interviewed conveniently right as he's starting a gay travel magazine app for the iPad.

Instead of the biggies such as San Francisco or New York City, which might be overwhelming, consider choosing "a nice, manageable Pride in an interesting location," Salvato says.

The list includes the ATL alongside Tel Aviv, Amsterdam, Asheville, N.C., and Boston. It doesn’t even mention Buenos Aires, Rome, Sao Paulo or Madrid. Those must be “too overwhelming.” So if you don’t want to be overwhelmed with balls-out, all-out Pride everywhere you turn, come to Atlanta where it’s “nice” and “manageable.” The caveats make our inclusion on the “world’s best” list a backhanded compliment. We say Atlanta Pride is as wild or mild as you make it. There’s something for everyone. Alright, alright. We’ll cut them some slack. But at least get all your facts straight, CNN. The listing hits the Oct. 13-14 festival this year and lumps in a brief mention of Atlanta Black Gay Pride as part of the action. While huge and great, it’s a totally separate event with different organizers. The report estimates the Atlanta Pride parade with “tens of thousands” of revelers. Think bigger, CNN. While it does mention most of the big Atlanta Pride events like the Dyke March, Trans March and Mass Commitment Ceremony, the list says the festival features a 25 years of AIDS posters exhibit. Um, no it doesn’t. That was last year, and it was Museum of Design Atlanta, not Atlanta Pride. It also says there is a men’s designer event. Again, last year and not organized by Pride. That Atlanta's listing is taken almost whole-cloth from last year's gay guide from the Atlanta Convention & Visitors Bureau might help explain the timing errors. To make it their own, CNN throws in suggestions to visit the zoo and the MLK Center if the festival gets too much and you want to "step out of the Pride fray." Wait. Is Pride too much that you need a break, or is it "nice and manageable"? Whatever. Kinda makes you wonder: If they can’t get it exactly right in the city where CNN is based, how accurate are the descriptions of the other best “nice, manageable, not too overwhelming” Pride cities? In the end, we’ll just take it as a compliment, backhanded or not, and move on. At least lists like CNN’s keep Atlanta and our diverse, awesome Pride festival on the gay tourism map and at the top of international minds. Plus, we can always blow them away once they get here.