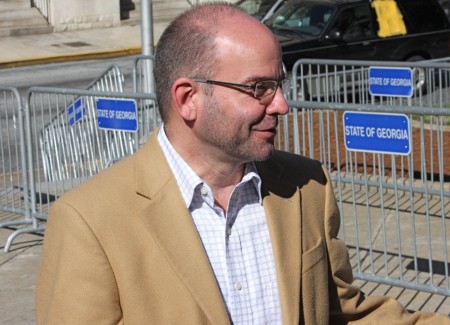 A part-time Atlanta resident and former licensed pastor of a United Methodist Church here was tapped by President Obama on Monday to serve on an advisory council to the White House Office of Faith-Based & Neighborhood Partnerships.

Harry Knox was one of nine new members announced Monday, filling out the 25-person roster that also includes one other openly gay person, Fred Davie. He is the president of Public/Private Ventures, a group that helps low-income families.

Knox, who is now director of the Human Rights Campaign’s Religion & Faith program, said in a statement from the organization that he was “humbled by the invitation.”

“The lesbian, gay, bisexual and transgender community is eager to help the administration achieve its goals around economic recovery and fighting poverty; fatherhood and healthy families; inter-religious dialogue; care for the environment; and global poverty, health and development,” Knox said. “And, of course, we will support the President in living up to his promise that government has no place in funding bigotry against any group of people.”

Knox could not be reached for comment late Monday.

In December, Knox criticized Obama for his pick of Rev. Rick Warren to deliver the invocation at the inauguration.

“By making this pick, the president-elect really sent a message to me and my community that we don’t matter as much to him as people that didn’t even vote for him,” Knox said in a report aired on NBC’s “Nightly News with Brian Williams.”

Knox served as the second fulltime executive director of the statewide gay rights group Georgia Equality. He led the group from 1998 to 2001. Knox joined HRC in 2005, though he returned to Georgia last year to work on the failed U.S. Senate campaign of former Democratic lawmaker Jim Martin.

One of Knox’s most enduring quips came in October 2000 during a prolonged battle to gain domestic partner benefits for Fulton County employees. When Mike Kenn, a Republican and former Atlanta Falcon, ran for and won the Fulton County Commission chair, he received endorsements from local gay groups for a pledge to support domestic partner benefits.

But in 2000, when the proposal bogged down, Kenn prompted an outcry from gay supporters when he flip-flopped and said his campaign pledge only included examining the issue, not fully supporting domestic partner benefits. Knox, at the time executive director of Georgia Equality, responded: “There are lies and then there are damn lies, and that is a damn lie.”

Knox was also in Atlanta last April as part of a protest by gay and gay-friendly congregations at the Atlanta Regional Post Office in Hapeville. The event was held to call attention to economic justice as a faith issue.

“Across the country, millions of same-sex couples face significant financial burdens and legal hurdles in building a secure future for their families,” Knox said.

On the White House advisory council, Knox will face some anti-gay members. Those include Rev. Joel Hunter, a Florida pastor and former head of the Christian Coalition, and Rev. Jim Walls, a vocal opponent of same-sex marriage.