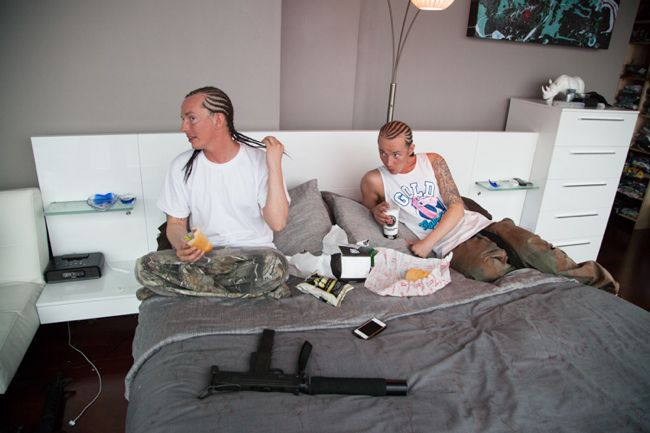 Creepy ATL Twins Sidney and Thurman Sewell want Atlanta gays to know that they are not homophobic, just creepy bros who talk about double penetration, bitches, snort coke and sling phrases like we don’t do “no fag shit.”

Their clarification came via a lengthy profile in Creative Loafing, which in lurid details paints a similar picture to the one Vice offered up in introducing the ATL Twins to the world in 2012. What’s different this time? They hang out with James Franco and get a few more minutes of fame thanks to a bit role in “Spring Breakers.”

Now, with a little more celebrity attached to their names — and a snazzy Midtown condo, which is not gay at all — the ATL Twins say the media gets it wrong when it comes to their creepy anti-gay stuff.

As much as they crave the attention, they also think they’ve been misrepresented by the media. The Twins took turns explaining to me that they felt the first Vice interview made them sound homophobic, when they say that couldn’t be further from the truth. They wanted to stress that they understand what it’s like to have a sexuality and lifestyle that society regards with skepticism or disgust; they wanted be sure this story would express a kind of solidarity with anyone who might be misunderstood in a similar way. In the middle of making this point, one of the brothers looked down at his phone and said, “Hold on, this bitch is calling us.” Bitches, as the Twins would put it, are often calling them.

Sounds good, at least until you’re reminded of the creepiest things they said in their Vice profile:

Glad that’s cleared up. No homo.