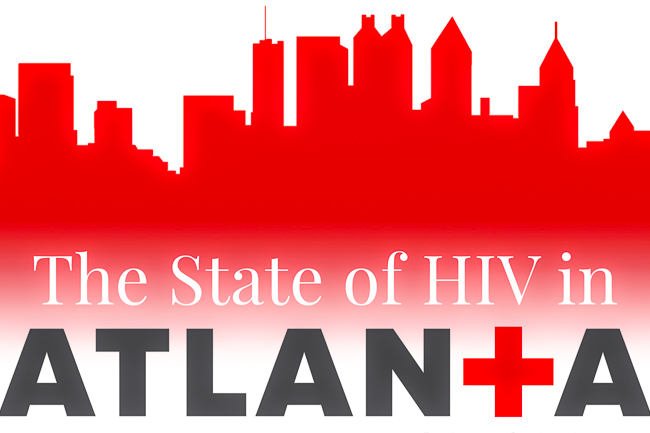 Atlanta’s identity is loaded with things to be proud of. A legacy of civil rights activism. Headquarters of some of the world’s most recognizable brands. A vibrant and envied hip-hop history and future. A burgeoning technological hub. Home of the world’s busiest airport. The Hollywood of the South.

But Atlanta’s story isn’t complete without mentioning its place as the center of an HIV epidemic.

The reasons why are wide and varied, according to HIV/AIDS activists, doctors and researchers. Atlanta has a number of issues that individually are not uncommon, but combined they make a unique, toxic Southern stew: stigma about HIV, lack of affordable housing, bureaucratic red tape (and, often, ineptitude), Bible Belt skittishness about sex, to name just a few ingredients.

But the experts Q spoke with also see signs of hope. A diverse group in Fulton County has a plan. Another initiative is underway on the federal level that includes the four hardest-hit counties in metro Atlanta. A little blue pill is completely changing the game — if the people who need it most can get it.

This is the state of HIV in Atlanta.

The Perils of Stigma

Dr. Melanie Thompson has been at the center of everything HIV/AIDS in Atlanta since it started ravaging gay and bisexual men and transgender women in the 1980s. She founded one of the most respected HIV/AIDS research facilities in the country — the AIDS Research Consortium of Atlanta — in 1988.

Atlanta’s HIV problem is “entrenched and relatively unchanged over time,” Thompson said. “What people should be concerned about in terms of our epidemic in Atlanta is that it continues to power on in spite of the efforts that have been made so far to curtail it. We have a very fragmented public health system that is underfunded and has some challenges with coordination.”

Public health officials often fail to listen to those who know most about the epidemic: the people living with, and at highest risk for, HIV and the frontline community of workers in the field, she said, adding “We are struggling with the silos and the fragmentation that keeps our response from being as effective as it could be.”

Young gay and bi men of color and transgender women of color are hardest hit, so Atlanta being a hub for LGBTQ people of color also comes into play.

“It is a concentrated epidemic increasingly within communities that already struggle with stigma and discrimination and social determinants of health like poverty, lack of housing, lack of jobs, lack of healthcare,” Thompson said. “So the state of HIV in Atlanta … [is] largely driven by things like wealth inequality and lack of access to healthcare.”

“This is going to take an entire community effort to continue to reduce stigma,” he added.

“Atlanta is a transplant city where the HIV statistics reflect individuals who may have acquired the virus from other states but now reside in the Atlanta metro area making the infection rate higher for this populous,” he said.

Thompson is co-chair of the Fulton County HIV/AIDS Prevention, Care & Policy Advisory Committee, which was created in 2017. Due to bureaucratic issues with the county’s Board of Commissioners, the committee charged with updating and enacting a strategy didn’t even start meeting until 2018.

Getting people living with HIV in care and keeping them in care is a problem in Atlanta, which leads to higher transmittal rates of the virus.

“Concentrated focus on linkage to care should be our number one priority,” Thompson said. “That would include looking at the numbers of funding that are needed to supply the care that is essential to good retention.”

Finding those funds has been an issue, but new sources have opened up recently. A federal plan was unveiled in February to end AIDS by 2030. Cobb, DeKalb, Fulton and Gwinnett counties are targeted as part of it. Some $1.5 million will be given to DeKalb, though it is still unclear exactly how much the other counties will receive and when.

Here at home, Atlanta Mayor Keisha Lance Bottoms earmarked $250,000 in the new city budget to fight HIV/AIDS in June. The Elton John AIDS Foundation made good on a pledge to match that amount. Bottoms put $100,000 into the budget for that purpose in 2018.

Thompson said these are good signs, but more will be needed to truly tackle the epidemic.

“If half the people living with HIV are not in care, and if we are successful in bringing them back into care and keeping them in care, we really do not have enough money to take care of them or the medical personnel,” she said. “Linkage and retention is the most complicated of the medical care issues that we have.”

“Housing really does come first,” Thompson said. “If people don’t have shelter, they’re really unlikely to be focused on getting their medication refilled or making it to clinic visits and the kinds of things that most people take for granted.”

That makes the city’s years-long issues with managing an HIV housing program even more frustrating for those working to stem the epidemic.

The Housing Opportunities for Persons with AIDS (HOPWA) program is federally funded, and it’s up to the city to disperse those funds. Housing advocates called the city’s HOPWA grants management “a mess” in 2018, and just last month, numerous advocates told an Atlanta City Council subcommittee that efforts to improve it still leave the city’s programs in “crisis.”

Thompson said it’s time for local authorities to come together.

The city has spent just $1.9 million of $23 million in federal funds for the program, according to the AJC. The city’s director of grants management said they are working on getting HOPWA funding to the non-profits, but HIV/AIDS activists are skeptical.

“At the highest level, the county health departments, the county commissioners, the City of Atlanta and other cities within metro Atlanta need to come together with the community so that we can all be on the same page and really join in this fight together because the fragmentation will literally kill us,” she said.

Progress under the Gold Dome

While there has been frustration with county and city efforts, a surprising force emerged in the state legislature to advance HIV legislation: metro Atlanta Republicans.

They sponsored two bills that Gov. Brian Kemp ended up signing into law, including a bill establishing a needle exchange program and a bill creating a pilot PrEP program.

State Rep. Park Cannon, a Democrat from Atlanta and one of five openly LGBTQ members of the legislature, welcomed the bipartisan effort.

“It’s beyond time that partisan politics get of the way so that we can provide care to Georgians at risk of living with HIV,” she told Q.

For her part, Cannon said she’ll focus on a bill in the 2020 session to modernize HIV instruction in Georgia’s K-12 schools.

“It’s already filed and we need the public to let the health committee know that we deserve a hearing,” she said. “It’s commonsense to learn about HIV before learning about AIDS, but Georgia does not model that.”

A metro Atlanta Republican also sponsored a bill this year that would make it easier for HIV-positive Medicaid recipients to receive the most effective medications. It will be coming back in the 2020 session.

All of our sources stressed the importance of pre-exposure prophylaxis, or PrEP, in curbing the advance of HIV. The once-daily pill for HIV-negative people reduces the risk of infection, which the CDC says has a 92 percent success rate.

“I imagine if we had it years ago, so many more lives could have been saved,” he said.

Thompson said expanding access to PrEP is “the next pillar” in the fight. The high cost of the drug is a barrier, as well as the costs of medical care and lab tests required for PrEP.

“We have something that could be lifesaving, we have to figure out how to meet the needs of the people who need access to it, and we have not done that,” Thompson said.

PrEP isn’t getting into the hands of the people that need it most, Thompson added.

“In our community, those are gay bisexual men of color, gay bisexual men in general, transgender individuals and black women,” Thompson said. “When you look at the demographics, the people who are actually getting PrEP are white men.”

Despite the issues surrounding the HIV epidemic in Atlanta, there is hope.

“People should feel optimistic to know that our National Strategy to End HIV and AIDS within 10 years is very possible,” said Ford. “We have the tools to do it maybe even quicker.”

“People on treatment with undetectable viral loads do not transmit the virus,” he said. “We have started rapid start programs to begin antiviral medications the day of diagnosis to help compliance and adherence with taking HIV medication, which will decrease transmission rates.”

More and more people are coming into Positive Impact Health Centers to enroll in PrEP, according to Lehman. While the numbers of those lost to care are “alarming,” HIV/AIDS service organizations in Atlanta are bringing more people into care and stretching their resources to make it happen, he said.

“Just in PIHC’s first quarter of 2019, we have seen a 35 percent increase in our behavioral health programs, 55 percent in medical care, and 148 percent in the PrEP program,” he said.

Rosenstock also had plenty to be hopeful about in his practice, including his patients thriving with HIV, an increasing number of effective advocacy groups and Atlanta Mayor Keisha Lance Bottoms’ attention.

“That’s a good start, but there’s so much more real work to do,” he added.

Lehman agreed, and voiced a common refrain from HIV/AIDS activists, doctors and researchers in Atlanta: “We have all the tools needed to turn this epidemic around,” he said.

Find updates and coverage of all these issues and activities updated regularly at theQatl.com.

Pick up a new edition of Q magazine each week at queer and LGBTQ-allied venues around town.