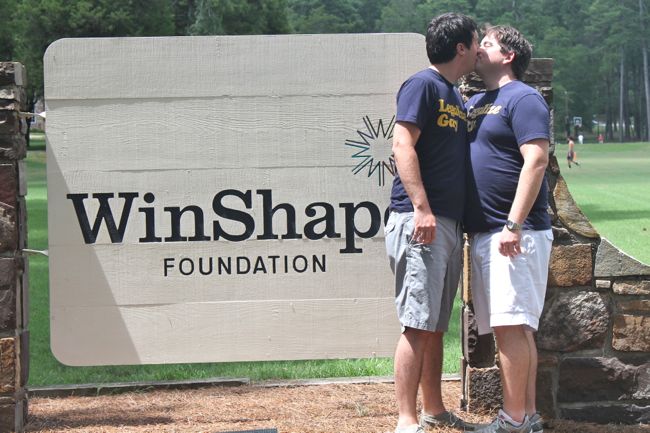 Not to be out-kissed by an Atlanta lesbian couple or a handful of LGBT activists in Decatur, Thomas Abrams and Justin Dyer took their same-sex Chick-fil-A protest smooch to the company’s marriage retreat. The Atlanta couple – Abrams on the left, Dyer on the right – made the trek to the WinShape Foundation in north Georgia on Sunday to lodge their protest at the symbol of Chick-fil-A’s very public opposition to gay marriage. Just like Chick-fil-A President Dan Cathy, WinShape defines marriage “as being between one man and one woman.” Chick-fil-A funds the foundation, which refuses gay couples despite its plea to help strengthen families. Just not the gay ones. Unlike Cathy, WinShape has not come out swinging against “arrogant” LGBT activists. So among the green pastures and tranquil setting of WinShape, Abrams and Dyer held their protest, one smooch at a time. What they needed was a theme song, like “Dear Chick-fil-A” from Atlanta lesbian couple Bria Kam and Chrissy Chambers. No word on whether they joined Cobb County crank Jim Mize on their return trip for a lesbian chicken sandwich or Two Chicks-fil-A Sunday Brunches. Photo by Thomas Abrams