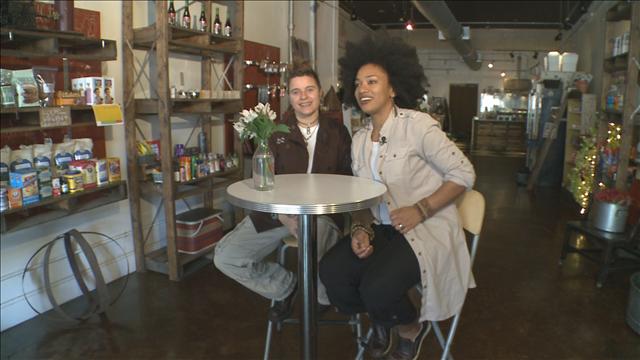 It’s been a busy 10 days taking the nation by storm with gay activism for Atlanta restaurant owners and lesbian couple Doria Roberts and Calavino Donati. Not many get the chance to take on Chick-fil-A but take down Florida’s lieutenant governor, too. Florida Lt. Gov. Jennifer Carroll got the anti-gay ball rolling last week with a misguided comment that “Usually black women that look like me don't engage in relationships like that" in response to allegations that she had an affair with a woman. That got Roberts, a popular Atlanta musician and out local personality, thinking. Like many, Carroll’s insensitive stereotyping was perceived as an obvious affront by Roberts. Twitter saw a mini explosion right off the bat. Seriously, what do black, or any, lesbians look like, exactly? But unlike others, Roberts did something about it. She started the Twitter hashtag #ThisIsWhatALesbianLooksLike, the Huffington Post picked up on the idea, and a viral phenomenon was born. Hundreds of photo tweets poured in from women who, of course, looked all kinds of ways and came from many different walks of life. We’ve collected just a few in the gallery below. Then Roberts then wrote an open letter to Carroll published in the Huffington Post.

I wasn't going to allow yet another public figure to offer my life up as a whipping post to absorb their public flogging -- especially one who looked like me. Yes, despite what you think, Lt. Gov. Carroll, you do look like me.

Carroll apologized for the offense Thursday night. But Roberts and Donati (photo, right-left) weren’t done making a difference. Their popular eatery Urban Cannibals was just the place to take on another LGBT cause, the recently rejuvenated firestorm over Chick-fil-A when its president Dan Cathy called gay activists “arrogant” and finally coming out of the closet from the company’s previous statements that “we’re not anti-anybody.” After all, East Atlanta’s Urban Cannibals cooks up a mean chicken in Atlanta itself. So Two Chicks-fil-A Sunday Brunches are now a reality and started July 22. Their take comes on Sundays when Chick-fil-A is closed and not serving its fast-food version of fried chicken, Roberts and Donati serve up their tasty and cleverly named menu of non-bigoted options.

"Well, we're two chicks, we're married, and we cook," Donati tells 11 Alive. As the chef of the partnership, she's planning on chicken sandwiches and chicken biscuits to fill the menu for the weekend. They had the special event last weekend for the first time and say 60% of their orders were from the "Two Chicks" menu. After this weekend, they'll serve chicken every Sunday: the day Chick-fil-A is closed. It's no secret they're making a statement.