At least one Atlantan is on Obama’s Team Gay 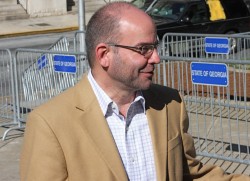 Nearly a year into President Obama’s first term, his actions on LGBT issues hardly matches his rhetoric. But when it comes to hiring the gays, he’s making progress and Atlanta has ties to at least one of his hires.

That honor goes to Harry Knox, who was more appointed than hired when Obama named him earlier this year to the advisory council for the White House Office of Faith-Based & Neighborhood Partnerships. The appointment of the longtime Atlantan caused quite a stir among conservatives — religious and otherwise — mostly because Knox (photo) is a professional gay whose fulltime gig is director of the Human Rights Campaign’s Religion & Faith program.

In other words, here’s an activist that can go verse-for-verse with religious zealots out to quote scripture to impugn every LGBT person they can.

Knox is among a select group of about 100 LGBT people appointed — or infiltrated, depending on your viewpoint — to various posts in the Obama administration. The jobs range from Ebs Burnough as the First Lady’s deputy social secretary — you know that had to be a gay — to Sharon Lubinski as U.S. marshal in Minnesota — a post perfect for a gun-toting lesbian.

With last week’s nomination of Beatrice Hanson as director of the Office of Victims of Crime in the Justice Department, Obama is closing on the record for LGBT appointments.

“Obama has appointed about 100 openly LGBT staff to the executive branch in his first year in office,” Denis Dison, vice president of the Gay & Lesbian Victory Fund, said in an email. “[President] Clinton appointed about 140 over 8 years.”

“Obama is certainly on track to set a record in this regard,” he added.

The Victory Fund has called attention to Obama’s gays through its Presidential Appointments Project, which helped LGBT professionals with the application process during Obama’s transition into the White House. A tip from them: You’ll undergo a full FBI background check. Our translation: If you got busted for cruising the park, that’ll surface somewhere in the hiring process.

Not all of the hires went smoothly. Beyond the public spat over Knox, Marisa Demeo remains in limbo despite her nomination gaining approval from the Senate Judiciary Committee on May 20. Demeo, a lesbian, is a magistrate judge in D.C. And Kevin Jennings has come under fire since his appointment as assistant deputy secretary for safe and drug-free schools in the Education Department.

But other nominations that require Congressional approval, including John Berry as head of the Office of Personnel Management and Lubinski as a U.S. marshal, moved through without a hitch.

Which gays have made it to the Obama administration? The Presidential Appointments Project offers this list: