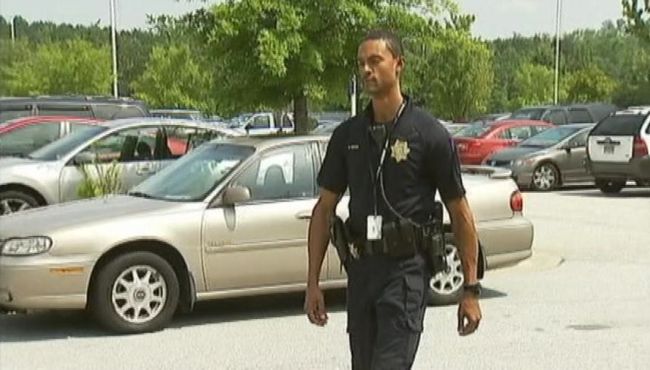 One of the ass-playing, strip-searching, MLK-invoking, lying Atlanta cops that took part in the Eagle raid now says that former supervisors forced him and other officers to meet arrest quotas and would reward them like spoiled children for doing so. The explosive charges come in an affidavit from Cayenne Mayes, who was fired in 2011 for lying about his role in the September 2009 raid of the Ponce Avenue gay bar. Now, Mayes is one of two former Atlanta police officers facing a federal lawsuit for publicly strip searching and fondling a man during a traffic stop. The other former officer in the lawsuit, Stalone Davis, resigned from Atlanta police. He also took part in the Eagle raid and was cited in an investigative report about the raid for violating police operating procedures and Fourth Amendment protections. Both men were part of the police department’s notorious Red Dog Unit, which took part in the Eagle raid, was dumped in 2011 and refashioned into APEX. In his affidavit, Mayes blames supervisors for the public strip searches, which are unconstitutional. He says supervisors would reward Red Dog offices who met the quotas with pizza, DVDs and shortened work days, according to the Atlanta Journal-Constitution.

“My supervisors and commanding officers encouraged these searches in more than one way,” former officer Cayenne Mayes said in his affidavit. “They told us to ‘always check the underwear,’ … making very clear that Red Dog teams had to meet arrest quotas.” “We were encouraged to exceed the quota with the promise to have pizza and even DVD movies waiting for us back at headquarters,” Mayes’ affidavit said, adding officers also could go home early.

“I was not a rogue officer,” Stalone Davis, who resigned from the APD, said in his affidavit. “I was following orders to make a strong presence, make arrests, help get drugs off the street… What we did was fine with the department so long as we were making arrests.”

Atlanta police denied the claims made in the lawsuit and leveled in affidavits from the former officers. The city spent $200,000 in 2011 to settle a separate lawsuit filed by the lead attorney in the Eagle case, Dan Grossman, over public strip searches by Red Dog officers. In that case, the men accused Red Dog officers of forcing them to drop their pants in public during a traffic stop and spread their cheeks -- yes, those cheeks. The city also paid $2.7 million in legal fees and settlements for lawsuits related to the Eagle raid. But don’t worry too much about Mayes, the former Red Dog officer. In October 2011, he leaned on the words of Martin Luther King, Jr. in his fight to regain his old job. He also asked gay residents to show mercy on the former cop, something he and his colleagues clearly didn’t do when they raided the Eagle. Fortunately, the city’s Civil Service Review Board told him to piss off. His law enforcement career, though, wasn’t over. Former Clayton County Sheriff Kem Kimbrough hired Mayes last June. He also picked former Atlanta police Sgt. Willie Adams, who was also fired for his role in the Eagle raid. Maybe they like that sort of public ass play in Clayton County. UPDATE: An earlier version of this post said Stalone Davis, a former Atlanta police officer in the Red Dog Unit, was not involved in the Eagle raid. Top photo via WSB; excerpt photo via GA Voice