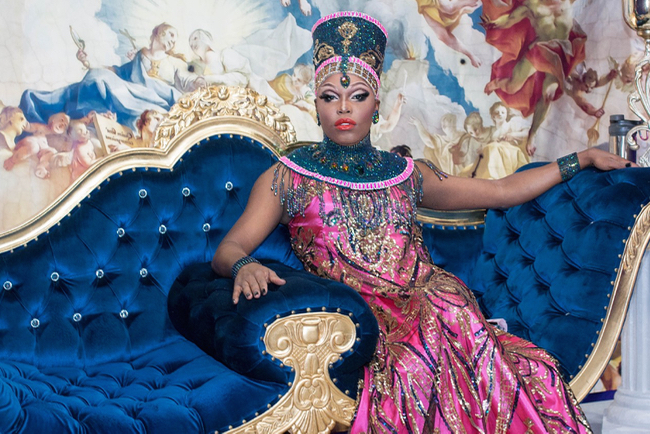 Asia O'Hara isn’t here to play. Though she does play well with others, she is not known for messing around. ATL gets a front-row seat to her late-season RuPaul’s Drag Race magic when she performs for Wussy’s h2(H)oe summer-themed party on June 2 at Heretic.

Hailing from Dallas, Texas, O’Hara has stolen the hearts of many a fan of the show and is at this point in the competition considered a lock for the finals. For some it’s her creative quirk, her smooth confidence, her warm smile and the spritely twinkle in her eye. Perhaps it’s the Lone Star State’s need to do everything BIG, BIG, BIG – headdresses, fringe, tropical neon, bright and beautiful.

Everyone can agree, though, O’Hara is as genuine as they come, and that holds true wherever she is, from shows like the upcoming Atlanta gig to L.A.’s prime convention DragCon. There she served an Egyptian Queen look, and her recently increased fame made the visit even more special.

“Anytime I get to be around people that appreciate what we’re doing on the show, it’s always positive,” O’Hara tells Q. “It was phenomenal.”

Despite DragCon drama with same-name-unrelated queen Eureka O’Hara, as well as a sea of NYC drag drama on the show itself, a refreshing leadership with razor sharp focus on the tasks at hand sets her apart from her fellow Season 10 competitors. A favorite of Michelle Visage, this “chameleon queen” has style for days.

Her creations tend to be fantastical with a bit of showgirl glamour. A fan of Thierry Mugler, she can combine pageant diva with pop culture princess, color theory always on point.

And she’s not afraid to have fun: That Tweety number for “The Birds” challenge will be long remembered in Drag Race history!

But it doesn’t matter what you wear on the outside if you’re rotten on the inside. O’Hara has a maternal character who doesn’t mind helping others. The only time we've seen her have anything close to a glitch was when she left less time for herself during a challenge to help all the other contestants with their looks.

“I appreciate kindness. I gravitate towards people with integrity,” O’Hara says. “In life, however, there are always going to be those with fractious personalities, and when I encounter them, I lean on religion.”

So help her gawd, how has she not snapped with some of the over-the-top attention hoarders on Season 10?

Regardless, O’Hara’s loving watching the show and says that she’s connected with so many of the other contestants. When discussing her favorite moments, she glows when talking about others’ triumphs and barely mentions her own.

“Seeing Kameron win the Cher challenge was a favorite moment because Kameron is his own biggest critic and it felt good to see him win,” O’Hara says. “Dusty Ray Bottoms sharing his story about his upbringing and what he went through with his family was also a favorite, as well was when Miz Cracker saw her family on screen during Untucked.”

Season winner or not, Asia O’Hara has made her way into our hearts. She doesn’t need to steal the spotlight because her talent, finesse and big heart ensures the spotlight comes back to her.

For the h2(Hoe) party, that means the category is: Swimwear. Come prepared to serve beach babe bounty, skimpy as you dare. O’Hara will be joined by Brigitte Bidet, Colana Bleu, Dotte Comm, Evah Destruction and Taejah L. Thomas.

This article originally appeared in Q magazine. Read the full issue below, and pick up your hard copy around town.