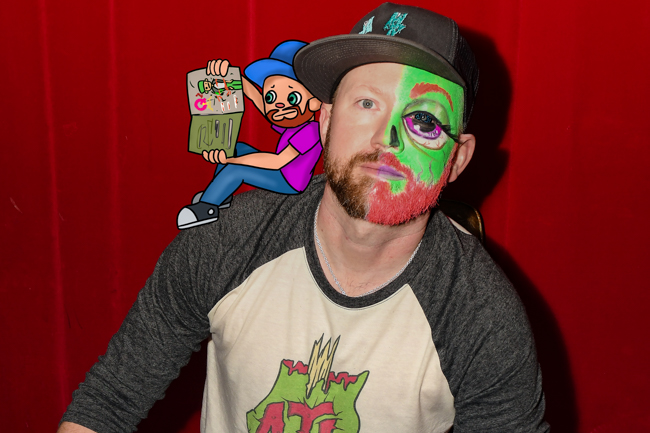 You very probably see Brad Gibson’s artwork on a regular basis already. You could easily be wearing one of his t-shirt designs right now and not even know it. In fact, since this busy artist is a master of cosplay too, you could even know Gibson personally, look right at him, and not know it’s him.

To say Gibson, 40, is prolific out-of-costume as well would be an understatement. His one-of-a-kind designs are featured on the gay graphic tee label Swish Embassy, his own Neon Horror page on Tee Public, marketing materials for the likes of Joining Hearts, and collaborations with queer Atlanta’s own ABetterBuzz Brand Goods. His illustrations also appear in merchandise for local and national queens, and even RuPaul judge Ross Matthews.

Gibson could take on design as a full-time gig, and he does. But it’s just the tip of a very creative iceberg.

“By day, I am a Marketing Director for a Production Company, and I juggle that with my design and illustration business,” the artist says. “They both take up about equal time now, so it’s two full-time jobs.”

Among more expert-level makeup and costume transformations at events like Dragon*Con and queer fundraisers all over town, he has done a spot-on Trixie Mattel and other pop culture staples and mashups, glamorous drag, and truly terrifying demons and monsters.

“I am inspired a lot by the 1980s and the toys, cartoons, music, horror movies I grew up with,” Gibson tells Q. “They clearly made an imprint on my soul, because they were my refuge growing up as a queer kid in the mountains of Kentucky.”

Add to that list of activity the illustrations appearing on the last page of every Q magazine. Each and every week, he visually interprets the letters and responses in the magazine’s advice column.

“I love the weekly advice toons,” he says. “I love the challenge of interpreting these letters each week, and I try to approach them with a distinctly queer point of view.”

Gibson took time with Q to dig in and explore his queer point of view, his work and play, his background and inspirations, and his singular perspective for this cover and cover story.

Tell us about your growing up.

I’m from a small town in Kentucky called Raven. Very small Appalachian town. I grew up in a holler! Very close to where country music icon Loretta Lynn is from. And since my dad was a coal miner, you could say I’m a Coal Miner’s Daughter.

How long have you been in Atlanta?

Since 2003, on and off. I actually used to be a singer and dancer for about a decade, and I would travel away for gigs. I’d work on cruise ships, at theme parks (including Dollywood! One of my favorite gigs ever), and wherever I could get a gig that would pay the bills. But Atlanta was always homebase for me.

Everyone wants to know your relationship status.

I’ve been in a relationship with Grilled Cheese since I was able to chew… so like 38 years. Also, I guess my Steven counts too, and that’s been 15 years. 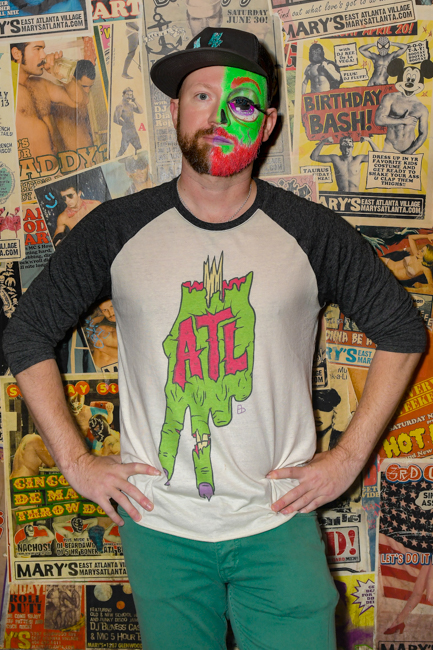 How did you get started designing t-shirts?

I have a degree in illustration/design and had a former job at a t-shirt printing company, and I took to it like a fish to water. For my personal brand, it all really started a few years ago when one of my best friends wanted us to have t-shirts made for a Dolly Parton concert we were attending.

I came up with the phrase “Beg Your Parton” and drew a cutesy cartoon Dolly to go with it. At the concert so many folks were asking where we got the shirts because they thought they were some of her official merch.

From there, I did some groundwork to figure out how to best go about producing them, and about a year later I launched my shops. Two years later I have over 200 designs of varying taste.

What inspires your designs, and where can we find them?

Sometimes it will be something someone says, a movie I’ve watched, a comic book I’ve read, or something I’ve seen on TV. I really don’t discriminate in what I create, because I want there to be something for everyone. It’s all basically all pop culture through my lens.

I have designs in my shop, Neon Horror, on TeePublic. You can also find designs I’ve made or collaborated with on Swish Embassy, and a really fun collaboration I did recently with ABetterBuzz Brand Goods.

I am also fortunate enough to have illustrated several designs for drag queens, other publications, and queer performers for their merch.

You’ve got quite a reputation for epic cosplay.

I love transformation, I love becoming something that otherwise would only live in my brain, and those transformations tend to come from my interests and inspirations and get filtered through my own aesthetic. Costumes and makeup always feel like an extension of my art, of my illustration. And like my illustration, I try throwing any and all of it out there and see what I respond to and what people respond to.

I always love playing with gender and giving androgynous looks, but I will definitely turn out a full female illusion LEWK should the occasion call for it. I would love to do drag performing more often, so we’ll see where/if that goes anywhere in the future.

There are a few specific looks I want to do so bad that I haven’t had the time to put together yet… but one day they will happen.

What can you tell us about your process on the Q advice column?

I typically read the letter and break it down to its’ simplest central statement, then I explore what imagery comes to me from there. Because my brain works the way it does, I almost always ask someone if they get the reference, and (hopefully) I think they mostly land.

Something else I try to do as often as possible is to make the characters gender ambiguous, so that they could resonate as widely as possible. If the topic of the letter is more serious, I try to not ever make light of the situation or turn it into a punchline. While I’m about as sarcastic and dry as they come, I try to never approach anything in a posture of malice.

It seems like you’re always busy. How do you stay so prolific?

I have always steered my sails in the direction I felt the universe taking me. If something really interests me, and more importantly if I think I have something to add to the conversation, I go for it… with varying degrees of success.

I tend to embrace risks and am completely inspired by others who do. I feel like I take elements of myself and heighten them through art, and I tend to have conversations I want to have through artistic expression. I’ve never subscribed to the idea of creatively staying in one lane, because I want to explore my potential.

My point of view and creative input go into costumes, illustration, design, marketing, events and nearly everything I do. My motto is YOLOTIKO (You only live once that I know of), so why not be a sponge and soak up as much of it as you can? I don’t take myself or life too seriously, and I think my art reflects that.

How informed is your work by being queer?

My work is informed by experiences as a queer person who came to terms with it a lot later than the younger generation now seems to. I’m a student of pop culture, music, art, otherness, and it all influences me in different ways.

I have never felt that I fit in any subsect of queer culture, so I just immerse myself in as much of it as I can. I try to be friends with as many different types of individuals as possible to broaden my point of view.

What do you think makes a ‘queer aesthetic’?

There are plenty of works of art that aren’t specifically made by queer individuals that resonate with queer people, and I’m sure vice versa.

Also, speaking of vice versa, I had a teacher in 3rd grade that would call it “VICEY VERSEY” which I always thought was odd, and now I look back on that and think “That was a teacher, she was teaching us.” But I digress.

I don’t think I could ever exactly pinpoint what makes something queer because it feels so broad, but I do hope that people see that what I do is influenced and informed by my inherit queerness and the way I see the world.

It's the first time my illustrations are featured in a worldwide released book, coming in February! I became acquainted with Ross Mathews in the last year, then did merch for his DragCon table. When he asked if I would illustrate his upcoming book, my jaw hit the floor.

He has been a dream to work with. Shameless plug: Pre-orders for that book are now. I have read it, and it is highly, highly entertaining. Plus, all pre-sales count toward first week sales, so I’m crossing my fingers I’ll soon be a New York Times Best Selling Illustrator! C’mon 2020 be good to me.

You seem to collaborate well and often — ABetterBuzz, Ross Matthews, Joining Hearts, to name a few. Do you see that continuing?

I’m always open to collaborating with other queer artists and feel beyond blessed to have worked with the queer entertainers, queer publications, non-profits, and other artists that have challenged me and allowed me to share with them and their livelihood.

What else would you like to say to Queer Atlanta?

There’s more to come from here. Just follow me on social media. And please feel free to say hi!

Pick up each new edition of Q at queer and LGBTQ-friendly venues across Atlanta.