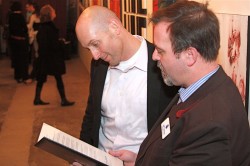 A collection of artists came together for “Abstracts of Love,” an exhibit that opened Wednesday with a benefit for Georgia Equality and a remembrance to a longtime LGBT activist who died last year.

The Jack Art Gallery exhibit in Studioplex in the Old Fourth Ward kicked off with a reception and silent auction that helped raise $850 in donations alone for Georgia Equality. The group also receives a portion of the sales from the artwork for the show, which runs through March 5. That could raise the tally to as high as $2,000, says Jeff Graham, executive director of the statewide gay rights group. 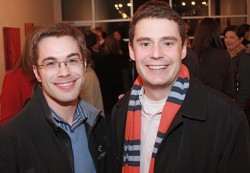 “That certainly is money that comes in at a critical time so that we can continue with our lobbying duties at the State Capitol and to start gearing up for the important election work that we will be doing with the primaries in July,” Graham says.

The reception also remembered Allen Thornell, who served as executive director of the statewide gay rights group from 2002 to 2004 and was board chair when he died Aug. 3. State Rep. Simone Bell, who became the first openly lesbian African-American elected as a state lawmaker in the nation when she took office last December, presented a resolution honoring Thornell that was adopted by the state House on Thursday. 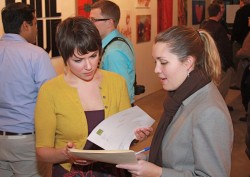 The resolution, which calls Thornell one of the state’s “most distinguished citizens,” credits his volunteer work with LGBT and HIV organizations and civic groups, as well as his compassion and generosity. Chad Prosser, Thornell’s partner when he died, was on hand for the reception (top photo with Graham).