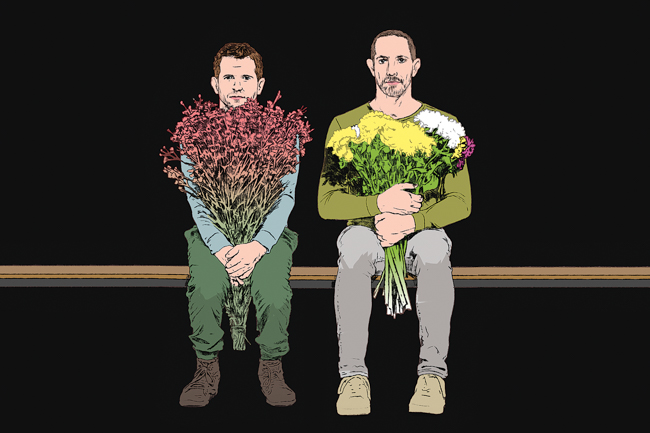 Niv Sheinfeld and Oren Laor are no strangers to social issues, cultural awareness or identity politics. Nor is the male Israeli couple afraid to include those themes with humor and heart in their compelling work as choreographers and dancers.

“We’re reminded of a quote by [Atlanta’s own Coretta Scott King], which says something like ‘The battle for freedom is never really won. You have to fight for it and win it in every generation,’” the dance duo tells Q. “We hope we are contributing our share towards winning in the perception of 'otherness' which is very vast and broad in its implications.”

Atlanta gets a taste of all that queer dance magic and more as the duo continues their partnership with Atlanta’s Core Dance in two pieces staging this week at 7 Stages in Little 5 Points. In American Playground, Core Dance performs the couple’s humorous, high-intensity homage to American culture, which from their outside perspective is “sassy, delicious and fragile,” they say.

Those qualities come together with the choreography team’s modern, approachable style, they add.

“Our dance is very different from what is usually expected in the dance world,” the couple says. “People laugh in our shows, and we are thrilled because it reinforces for us the notion that meaning doesn't derive exclusively from very serious or pretentious stage works.”

To really introduce audiences to the couple in a personal way, the performances set for Jan. 31 – Feb. 2 also include a second piece that they perform themselves, The Third Dance. In 2012, Sheinfeld and Laor raised eyebrows and applause for their sexy gay interpretation of a couple in love in Two Room Apartment. Now they revisit the story and progress of the same couple in the American debut of this new piece.

“The Third Dance finds us more mature, more disillusioned, and therefore more embracing contradictions and disagreements, without losing the humorous aspect of being in a 'marriage,’” the couple shares, noting that their personal life indeed inspires the performance.

“The way we communicate, the small nuances, the comic moments are all drawn from our personal experience as a couple,” they say. “Some other scenes that show emotional eruptions are performative manifestations that we devised especially for the show, but these too have deep truth in them, only blown up to theatrical proportions.”

One aspect of most choreography and staging by Sheinfeld and Laor that audiences immediately notice is their use of minimalism. Stripped-down or non-existent sets, costumes and other typical performance trappings let the art shine through on its own merits.

“It puts more focus on the individual and on behavior and on relationship than it would if there had been a lavish stage set,” they assert. “However, minimalism too needs to be handled with a thought behind it. We don't dress as if we didn't notice what we are wearing, or as if the few props that we use are the first ones that our eyes laid on in the store.”

“In The Third Dance,the props are used as metaphors on one side, and on the other they serve to drive the narrative forward as they accumulate on stage,” they add.

So let’s see… queer content and players, innovative choreography, cultural insight and global perspective. What more could you ask for? How about the only message that Sheinfeld and Laor would have you leave with if they could pick just one:

American Playground and the U.S. premiere of The Third Dance stage Jan. 31 – Feb.2 with Core Dance Atlanta at 7 Stages. 7stages.org and coredance.org.

Photo and illustration by Efrat Mazor

This article originally ran in Q magazine. Flip through the latest issue below.