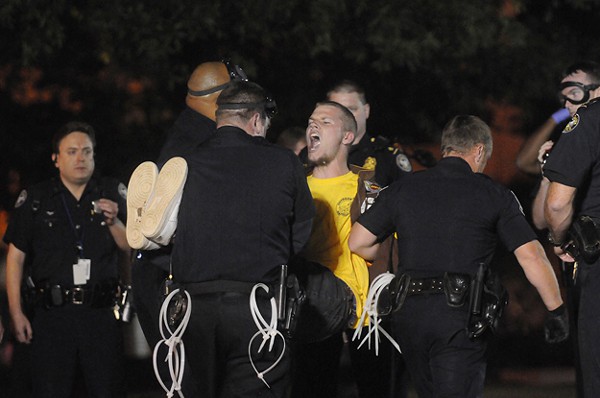 So much for that clergy intervention thing. Mayor Kasim Reed ordered the clearing of Woodruff Park late Tuesday, putting an end to both his patience and, at least for now, Occupy Atlanta’s efforts in the park. More than 50 people were arrested by an overwhelming show of police force. 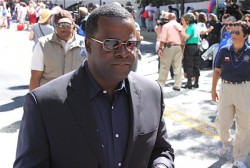 On Monday, Reed (second photo) surrounded himself with clergy members – including gay Rabbi Joshua Lesser -- during a contentious City Hall press conference, saying they would attempt to broker an end to the protest with Occupy Atlanta organizers. But by late Tuesday, Reed decided not to wait until a planned Thursday meeting between the religious leaders and Occupy Atlanta. He ordered police to storm the park after an hours-long buildup that included some 100 officers, police helicopters buzzing overhead and a SWAT team stationed nearby. Reed, ironically, watched the park clearing from the nearby SunTrust building. Occupy Atlanta has railed against the influence of corporate money in city politics. The gays, including a group from the Radical Faeries, joined Occupy Atlanta, though it wasn’t clear if they were among the dozens arrested and facing a court appearance Wednesday morning. State Sen. Vincent Fort, one of the General Assembly’s staunchest supporters of LGBT equality, was arrested. Angel Poventud, an LGBT activist and Faerie who joined the protests, tweeted a play-by-play of the police buildup and eventual clearing of the park on Tuesday.

#occupyatlanta 50 officers in riot gear just showed up in the park. Not sure what's going to happen but this shit is fucked up. Non violence

The evidence shows that despite the fact that Mayor Reed claimed that he was sending clergy to speak with Occupy Atlanta in order to find a “peaceful solution,” the outcome was already predetermined. Representatives from the group of clergy arrived at the park and requested a meeting for 5 pm. That time was not available because of a planned march which was posted in the schedule on Occupy Atlanta’s website. Participants in Occupy Atlanta and the representatives of the group of clergy agreed on a meeting time of Thursday at noon at Big Bethel AME Church. However, Atlanta police did not wait for this meeting to take place.

“For more than two weeks, the City of Atlanta, downtown residents and business owners have shown tolerance and patience for the members of Occupy Atlanta,” Mayor Reed said. “The protesters, however, moved from conducting an initially peaceful demonstration to increasingly aggressive actions. These actions led to my decision today to revoke the Executive Order. I would like to commend the Atlanta Police Department on executing an operation that resulted in no incidents.”