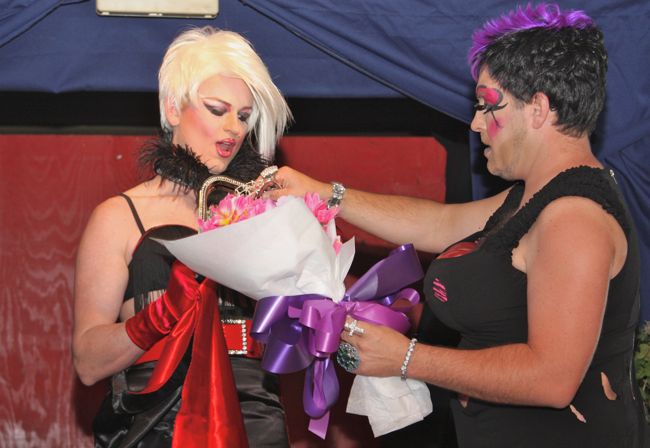 Look out. The Miss Barfly Pageant — one of gay Atlanta’s most irreverent, therefore one of the most beloved — Armorettes events of the year is coming. And the camp contest for a cause this year brings a Pest Control theme.

Applications to enter the zaniest drag competition are being accepted now through May 11. {[email protected]” title=”E-mail the troupe for an application”} or get one from any Armorette. For 2012’s “Miss Pest Control” theme, contestants will identify a pest in their life — be it an insect, person, event, situation or wherever their creative minds take them — then embody it on stage to compete for the title.

With 33 years and some $2 million of HIV fundraising under their belts, the Armorettes formula of wacky drag and heartfelt purpose is working. So just like last year, which named Chiffonne Anna-Nicole Hilton (photo) as Miss Barfly 2011: Mythical Madness after a particularly crazy show (view more pics), Miss Barfly 2012: Pest Control benefits the Armorettes PWA fund to help people living with and affected by HIV/AIDS.

“Don’t miss out on this great opportunity to show off your camp drag talents and help raise money for charity,” the group says in its call for registration. “It is always a great time and an exciting show to watch and be part of.”

For those of you who’d rather watch, mark your calendars. The contest goes down at Burkhart’s on May 20. The following Sunday, get ready for For the Boys: A Special Memorial Day Weekend Show with a military theme and special guest, former Armorette Wild Cherry Sucret.