Armorettes look back, forge ahead after 30 years 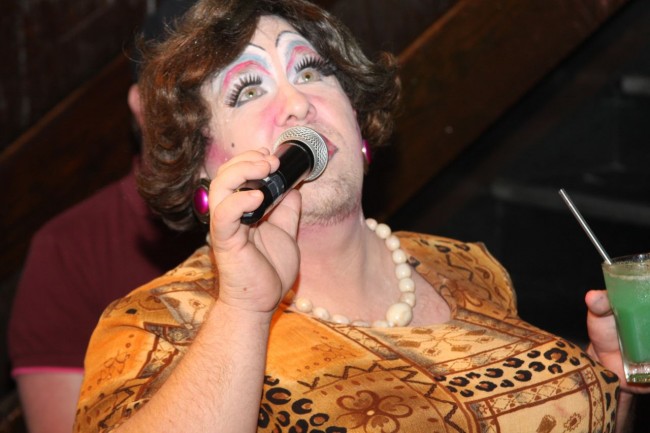 How do you measure 30 years? How much have you learned? How many friends have you gained and lost? That’s what the Armorettes are thinking as they plan their 30th anniversary show on Sunday at Jungle.

It’s hard to imagine that it’s been that long since Atlanta’s camp drag troupe began performing for tips that benefit HIV/AIDS services in Atlanta. Just as hard to fathom is that it’s been 30 years since AIDS first reared its ugly head as the baffling GRID — Gay Related Immune Deficiency.

That’s why the Armorettes’ signature bawdy humor, over-the-top costumes and often raunchy commentary is balanced to this day with a healthy dose of heart.

“When I think about AIDS, so much has changed,” says Armorettes co-chair Tony Kearney, aka Wild Cherry Sucret (photo, right). “In the beginning, people, including some of the Armorettes, were dying like every week.

“Now with the advances in the medications, people are infected or affected, but they don’t think about it as much,” he continues. “People have become complacent. There’s a whole new generation we’re reaching who don’t know what it was like, and that’s why we’re still doing it. We want to make sure attention is still being paid.”

The Armorettes change with the times as well, Kearney says. To keep it fresh, the emcees wing it and don’t hold their sharp, hilarious tongues.

“Our shows are never the same,” he says. “If it’s current, we’re making fun of it. If it’s a hot topic or on our minds, we’re talking about it. Things are coming out of our mouths that could never be scripted.

“If you think you know drag, we will make you think again,” he says. “Anything can happen.”

That goes triple for the anniversary show. With 13 current cast members in the weekly show, look for 33 past and current Armorettes in the anniversary’s opening group number, “Whore House.”

“Imagine having 30 whores on one giant stage,” Kearney laughs.

The anniversary show will see the return of many local names, including some who went on to other projects after getting their start with the Armorettes. Look for the likes of Bubba D. Licious, Kitty LeClaw, Deva Station, and Coretta Scott Queen, among many others.

The Armorettes also plan to present a giant check representing their 30-year total in monetary contributions – an amount so big that they’re saving it for the finale – as well as “a lot that makes it special,” according to Kearney.

“I’m one to get emotional quickly, so I can easily say expect tears,” he says. “We’re gonna get wrapped up in it, and it’s going to be a great show.”

Kearney says he got emotional again last Sunday for the Armorettes’ final weekly show at Burkhart’s (photos) before moving to their new home at Blake’s on Oct. 11. See our photo gallery of that event.

“For some of these young people, Burkhart’s is all they knew. It’s a new era.”

So no matter how much fun you have at the anniversary show or at the weekly Sunday shows, remember to tip generously. Kearney wants you to remember an Armorettes show – now as much as it was 30 years ago – is more than a good time.

“We do this for the cause,” Kearney says. “Every penny goes to AIDS. We do it because it’s unique, it’s the humor, yeah, but we do it for the cause. That’s what keeps us coming back.”