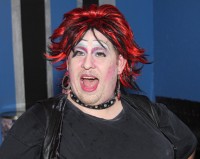 Gay Atlanta’s favorite camp drag crazies and beloved HIV fundraisers the Armorettes got a surprise e-mail Saturday night in advance of their regularly scheduled Sunday show at Blake’s: it’s cancelled. And no, weather worriers, it wasn't due to impending snow. The only thing that’s crystal clear about Sunday shows at Blake’s as of Monday is that the Jan. 9 show was indeed cancelled, and the future of the troop’s permanent home remains in question. But make no mistake: the Armorettes 32nd Anniversary Show at the Heretic on Saturday, Jan. 15 is definitely still a go, says Armorette Knomie Moore (photo). After a move from their longtime home at Burkhart’s to Blakes in September 2009, could the Armorettes already be looking for a new home to its long-held tradition of Sunday night fundraising shows? “If there will be shows at Blake's in the future on Sunday nights, I am not sure yet,” Moore says. Saturday’s anniversary show features Armorettes alumni and other special guests in addition to the current cast, and for a big finish, the group presents fat checks from donations collected in 2010 to the Living Room, Positive Impact and Someone Cares. Another surprise check presentation is part of the mix for the anniversary show at Heretic as well. Last year’s 31st Anniversary Show packed the house, as did the larger-than-life 30th Anniversary Show in 2009. Most recently their Trailer Trash Christmas Show was a rousing success. Click those events to view our photos. Heretic is also home to the twice-monthly Back Room Burlesque shows, which began in August 2010 to kick up their fundraising efforts and to kick off the bar’s early hours on alternating Saturdays before the night's guest DJ starts pumping. The Heretic’s Back Room Burlesque shows are “going very well, and the management of both the Heretic and The Armorettes are very pleased with the direction,” Moore says.