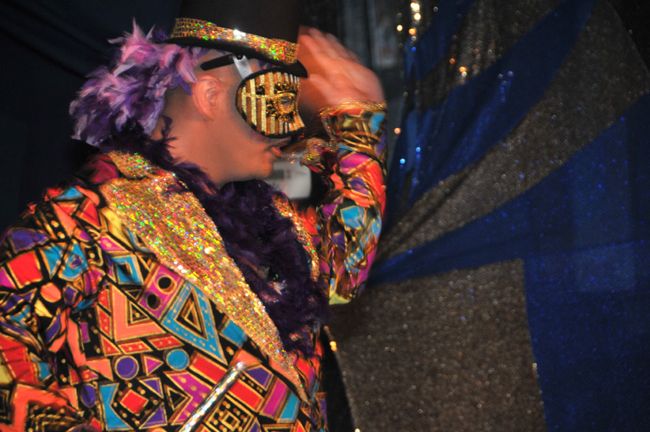 The Armorettes bid farewell to one of their own, BumbleBee ToonaHead, on Saturday during a special edition of their Backroom Burlesque show at Heretic as the performer leaves Atlanta for Florida.

Even for the camp craziness of the Armorettes, BumbleBee (top photo) brought the insanity to the troupe. Known for outrageous makeup, circus costumes, wild wigs and for baring her hairy chest, she went all out for her farewell performance on Saturday, yet somehow left the audience wanting more of her unique music mixes, confetti and glow sticks.

Backroom Burlesque has proven popular since its debut show in August, benefiting a different HIV/AID charity each month. Guests doled out the dollars for Open Hand Atlanta this time around.

Other recent Backroom shows brought the raucous to the Armorettes’ 32nd Anniversary in January and the Trailer Trash Christmas performance in December. The monthly Backroom Burlesque at Heretic is currently the only place to see the Armorettes after Blake’s cancelled their weekly show there in January.

After Saturday’s show, the Heretic crowd hung around for the sounds of visiting New York City DJ Chad Jack.