Are you a Sugar Mama/Daddy, or just unfairly supporting your partner? 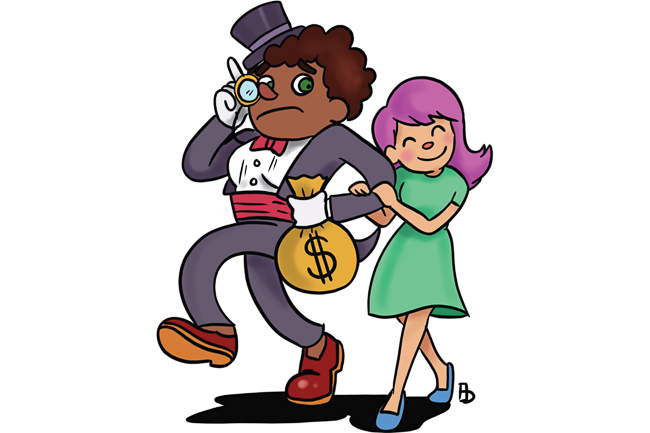 I’ve got a big issue with my partner that I don’t feel equipped to handle. When we moved in, I carried the load of the bills. They were in school at the time, but now that they’re employed, they still aren’t paying their fair share.

I still make more, and the house is in my name, but they promised that costs would be shared when the diploma was on the wall. Since then, they’ve said they’ll start paying bills, but haven’t.

On the one hand, is it fair to hold them to their word and ask that they kick in, since I can technically afford it? On the other, is it fair to ask me to bear the whole burden?

It also bugs me that the onus appears to be on me to bring it up over and over. And when I do, how do I make it less awkward than I already feel?

Unless your precept is Ma Morton-style — “When you’re good to Mama, Mama’s good to you” — it’s not only fair to bring it up, but well advised to do so for their good and your peace of mind. Being a Sugar Parent is fine if both sides consent, but it sounds like that's not what you intended or agreed to do.

But while your frustration may be understandable, it solves nothing. You may feel ill-equipped to bring it up because your emotions are so intricately interwoven with the facts. Relationships and money, as well as personal responsibilities and accountabilities, are fraught topics for everyone.

Hone the situation down to its essence, and I bet you can totally handle it. You’ve got a house, manage an income and take responsibility in myriad ways, so all the skills required to have a conversation are well within your grasp.

Hint: Their promises to participate in the future solve nothing. Assurances without follow-through are just empty words. Chances are that they feel just as awkward and don’t know how to broach the subject in a practical way either.

Communication and action are the keys to salvation for both of you. Not bringing it up is actually more awkward than bringing it up. “This is hard to say because we care so much about each other, but let’s sit down and figure out how and when to start sharing the bills.”

The rest is just details. Either base contributions on a sliding scale with level of income, or base payments on who uses what the most. Say, electricity and water are shared equally, but the person who watches the TV pays the cable.

Getting on the same page with a plan will not only relieve your individual burden of the bills and the grudge, but it may make them feel better for doing their part and relieve the unspoken stress between you.