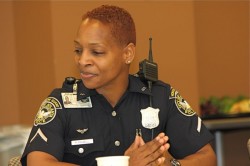 The Atlanta Police Department, facing renewed criticism for its handling of the agency’s LGBT liaison, introduced on Wednesday a second officer tasked with building bridges between police and the city’s gay residents.

But Officer Patricia Powell (top photo), a lesbian and 11-year veteran of the police department, faced pointed questions about her goals for the role and how the agency has made use of its other LGBT liaison, Officer Dani Lee Harris, who has held the post for more than four years.

Harris, who was not present during the two-hour meeting, was placed on medical leave on April 16. When she returns, the police department is expected to have two LGBT liaisons for the first time, meeting a pledge by Mayor Kasim Reed to have two liaison officers for LGBT residents. But police department officials did not say on Wednesday when Harris may return to active duty.

Powell was appointed as LGBT liaison on May 4, more than two weeks after Harris was placed on medical leave. Powell did not attend a demonstration in Midtown two days later in which hundreds of gay and gay-friendly people counter-protested a small rally by members of the anti-gay Westboro Baptist Church. The rally turned chaotic when the counter-demonstrators surrounded the anti-gay protesters, flooded an intersection and caught police off-guard.

Attendees at the session on Wednesday – which included leaders of several LGBT organizations and media outlets, along with City Councilmember Alex Wan and attorneys suing the city and police over the controversial raid of the Atlanta Eagle – questioned Powell’s absence and cited it as another example of how the police department isn’t integrating the LGBT liaison position into its operations. 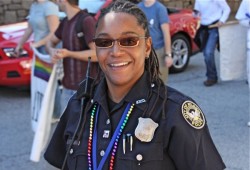 The agency was harshly criticized after the Eagle raid last September for its treatment of patrons inside the bar and for not alerting Harris to the undercover investigation that led to the Sept. 10 incident or for having her on hand when officers stormed the bar. Harris learned of the raid the next morning from a reporter.

On Wednesday, Powell was joined by Deputy Chief Ernest Finley, who oversees field operations; and communications staffers for the police agency and Reed. The event was organized by the Atlanta Police Foundation and held at the Atlanta Public Safety Headquarters in downtown.

“I’m very, very happy to be here. It’s like I need to meet you all and develop a relationship and partnerships because I can’t do this on my own. I need you and we need each other,” Powell said. “I’m a hard worker, I’m a dedicated person. I’m a very positive person. I can talk, talk, talk but I will definitely set by example.”

But the event on Wednesday raised questions about the police department’s use of LGBT liaisons. Though Finley attended a portion of the meeting, Major Erika Shields – the department’s chief of staff who directly oversees the liaisons – did not attend. Harris said that she was not informed about the meeting and that the police agency is preventing her from returning to work.

“I was never informed about the meting,” Harris (second photo) said. “APD is the one who is preventing me from going back to work. The medical leave was not by my choice or my doctor’s choice.”

The public didn’t learn of Harris’ medical leave until activists and reporters questioned her absence from the May 6 demonstration near Grady High School. Shields responded with a two-paragraph statement about Harris and Powell’s new assignment. Powell didn’t attend the protest; commanders at the scene didn’t seem aware that Powell was the new LGBT liaison.

Harris suffers from gran mal seizures and has experienced three since December. She suffered one of those two days before being put on leave in April. She wanted to attend the May 6 protest, even in civilian clothes, but feared her appearance might lead the police department to file insubordination charges against her.

“I’ve had seizures. Yes, that is the truth — three seizures since Dec. 20. But the seizures have never, ever put me out of work. My doctor never told me I had to stay out of work. APD is doing what they want to do,” Harris said.

Harris added that she has no idea when she might return to the police department. She filed a complaint against APD with its Office of Professional Standards, though Harris and Sgt. Curtis Davenport, who attended Wednesday’s meeting, would not provide additional details about it.

“The complaint is open and being investigated,” Davenport said in an email on Wednesday.

Also Wednesday, Powell deflected many of the tough questions raised about the role of the LGBT liaison in the department. In January, Acting Chief George Turner – one of five finalists to take the job permanently – said “we’ve tweaked the way” the LGBT liaison is involved in agency operations. At the meeting, Finley and Powell didn’t offer specifics on any changes since Turner made his comments during a press conference with Reed.

“My main role is that I am the link,” Powell said. “The link between the GLBT community and the Atlanta Police Department. That is what I see and being committed to both. The community needs someone to come to within the police department. It is a partnership and I am that middle person.” 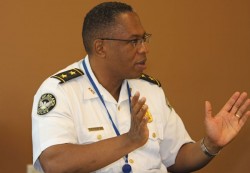 When pressed about the issue of Harris not being informed of the Eagle raid until after it happened, Powell said she didn’t realize that were communication issues between the LGBT liaison, the police department and gay and lesbian citizens.

“I didn’t know that that communication barrier was out there. I don’t want to be left out there not knowing,” Powell said.

Finley (bottom photo) did say that the police department learned from the Eagle raid, and that will help their approach to the LGBT liaisons in the future.

“What we learned from the Eagle bar incident is that there was a lack of communication,” Finley said. “We’ve got to bring that position into the fold. It’s going to be a situation of quality control, assurances that folks are being treated like people, like citizens, not like they are convicted of crime. Issues and concerns that come up throughout the department that she needs to know, she will have that information.”

“The key is going to be visibility and I am committed to working with Officer Powell to get that accomplished so that we can move this forward as quickly as we can,” Wan said.