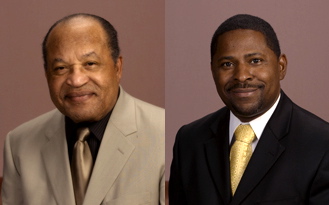 A gay, white College Park employee was fired due to racial bias, a federal jury found Friday. The employee, Christopher Jones, alleged that anti-gay bias may have also contributed to his termination.

Jones, the city’s former Director of Economic Development, ultimately declined to press the issue of possible discrimination based on sexual orientation. There are no federal laws or state laws in Georgia against firing someone for being gay.

The jury awarded Jones $150,000 in damages and attorney fees, plus $6,000 severance not offered upon his termination. Two of the three black College Park City Council members who voted to fire Jones in 2004 are ordered to pay Jones $75,000 each, and the city must make the severance payment.

The two still-sitting council members, Charles Phillips (photo, left) and Tracey Wyatt (right), voted with former council member Cynthia Jones to fire the development director in 2004 on grounds that he didn’t work hard enough to develop predominantly black areas of College Park, and that he was insubordinate.

Jones’ case included testimony that he brought $1 billion worth of investments into College Park for urban renewal during his six-years on the job.

Another council member, who is white, voted to keep Jones in his job. College Park Mayor Jack Longino, also white, did not vote on whether to terminate Jones.

The mayor told the Atlanta Journal-Constitution Friday that he is withholding comments until the judge in the case rules whether Jones is to receive an additional missed-opportunity payment had he kept his job, or to reinstate him in the post, an option Jones requested.

“I want to walk back into College Park City Hall with my head held high, because I did nothing wrong,” Jones told the AJC.