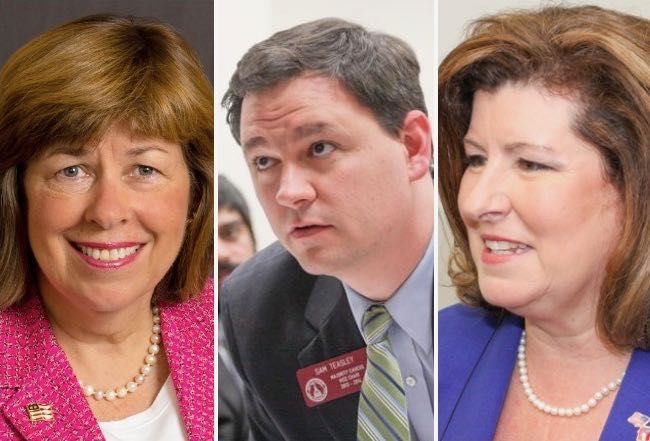 A “religious freedom” bill sponsor, a woman who is against gay adoptions and a woman who suggested quarantining people living with HIV were all defeated in Tuesday’s elections.

Democratic challenger Mary Frances Williams beat state Rep. Sam Teasley (photo above) by less than 150 votes, for a tally of 50.31 percent to 49.69 percent.

Williams has not declared victory and Teasley has not conceded.

Teasley has been pushing anti-LGBTQ “religious freedom” bills for the last five years with little success. He tried it in 2014, then he paired up with state Sen Josh McKoon but failed again in 2015.

He co-sponsored another one in 2016 that went nowhere, and he continued voting for the legislation through his remaining time in office.

Teasley is the third lawmaker who made “religious freedom” bills their signature issue to lose elections this year.

State Sen. David Shafer lost to former Rep. Geoff Duncan in this year’s GOP race for lieutenant governor. Shafer was co-sponsor of a bill earlier this year that would have allowed faith-based adoption and foster care agencies to ban LGBT people — one of several times he has pushed anti-LGBT legislation as the Senate’s No. 2 official.

McKoon was a favorite to win the Republican nomination for secretary of state, but he came in third in the four-man race and missed a runoff by nearly 40,000 votes.

McKoon became the face of anti-LGBT “religious freedom” legislation over the past five years in the legislature, but any substantial such bills failed to pass. McKoon has also trolled LGBT Georgians for years, tried to retaliate against LGBT-friendly businesses and called the medical needs of transgender military members “absurd.”

Price infamously suggested that people living with HIV in Georgia should be quarantined.

In addition to the quarantine comments Price made in a House committee meeting, she said, “It seems to me it’s almost frightening the number of people who are living that are potentially carriers, well they are carriers, with the potential to spread, whereas in the past they died more readily and then at that point they are not posing a risk. So we’ve got a huge population posing a risk if they are not in treatment.”

She later said her comments were taken out of context.

She beat an anti-LGBTQ Democratic primary candidate in 2017 on the way to winning the seat and assuming office, where she proceeded to speak out against anti-LGBTQ “religious freedom” legislation.

Both Georgia Equality and Georgia Stonewall Democrats backed her in the race against Aldredge.

Harrell told Project Q that she entered the race in part to protect her teenage daughter, who recently came out as LGBTQ.

“So [LGBTQ rights] issues have hit us personally at home,” Harrell said. “I would support these issues anyway, but it makes it that much more intense to have a family member who is and will be affected by the decisions that are made on these issues.”

During her time in the legislature, she was one of only a handful of Democrats in 2004 to vote against a constitutional amendment defining marriage as between one man and one woman.

Millar backed an anti-LGBTQ adoption bill, but claimed he supports gay adoption. He also voted in favor of a controversial “religious freedom” bill that passed in both chambers in 2016 before Gov. Nathan Deal vetoed it.

In statewide campaigns in 2006, 2010 and 2014, Handel went on anti-gay benders and disavowed her LGBTQ-friendly positions of the past. Her worst moments came in 2010 when she blasted civil unions, same-sex marriage and even agreed that adoptions by gay people should be banned. Four years later, she doubled-down and went as far as suggesting that being gay is a choice.

She doubled down on her opposition to gay adoption in the final days of her 2017 race against Jon Ossoff, but was still able to win.

NBC News called the race for Bourdeaux on Tuesday night, but then later retracted the call saying they received votes with a data entry error that incorrectly reported that 100 percent of precincts were reporting.

Bourdeaux’s campaign emailed supporters on Wednesday saying the race was too close to call and that she wasn’t giving up. Woodall has yet to declare victory. The margin of victory is within one percent, making Bourdeaux eligible to request a recount.