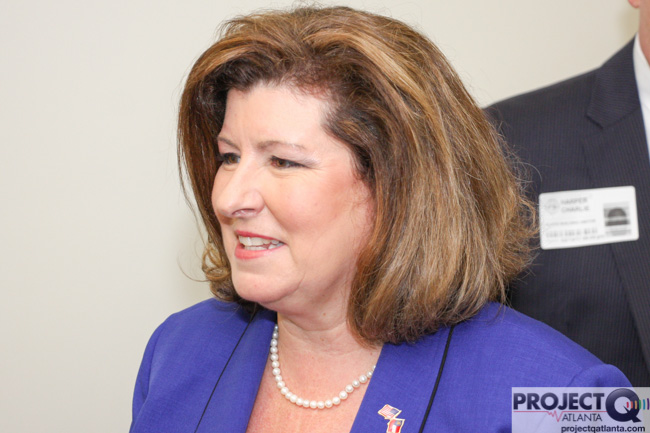 Karen Handel – who doubled-down on her anti-LGBT views in the closing days of her campaign – dispatched Jon Ossoff on Tuesday to win a metro Atlanta Congressional seat in the most expensive House race in U.S. history.

The two candidates had polar opposite views on LGBT issues in the race for the conservative-leaning 6th District that includes portions of Cobb, DeKalb and Fulton counties. Despite sticking with positions that LGBT parents shouldn't be able to adopt children – along with other anti-gay views – Handel won the brutal campaign 52% to 48%.

For political junkies, here's a nifty breakdown from the AJC on how each neighborhood in the District 6 runoff voted. Not surprisingly, areas near cities and Interstate 85 went blue for Ossoff.

With the win, Handel – a former Fulton County commission chair and Georgia Secretary of State – becomes the first Republican woman elected to the U.S. House in Georgia.

“Tonight reminds us, it reminds me, that anything is possible with hard work determination, grit and people who believe in you,” Handel said in her victory speech, according to the AJC. Watch her full speech.

After the defeat, Ossoff released this statement:

“For months, this community in Georgia has been a beacon of hope for people across the country. At a time when American politics is dominated by fear and deception, this community stood up for politics based on shared values, shared interests, civility, and respect. We showed the world that in places no one even thought it was possible to fight, we can fight, and we will fight. It's extraordinary what this community has achieved, mounting an unprecedented grassroots effort powered by more than twelve thousand volunteers. Thank you from the bottom of my heart.”

When Handel launched her campaign in February, she comfortably used the phrase “LGBTQ,” denied that she ever suggested that being gay is a choice, and offered a thoughtful answer on her views about LGBT issues. She struck a note of compassion.

“It's no secret that I'm called to a different place, maybe, for some of the beliefs in the LGBTQ community because of my faith,” Handel said at the time. “With that said, I'm also called to be accepting and compassionate.”

In a debate earlier this month with Jon Ossoff, her Democratic opponent, Handel even agreed that LGBT people shouldn't face discrimination. It was a big admission for Handel.

But that changed in the closing days of the campaign as Handel doubled-down on her anti-LGBT views. In statewide campaigns in 2006, 2010 and 2014, Handel went on anti-gay benders and disavowed her LGBT-friendly positions of the past. Her worst moments came in 2010 when she blasted civil unions, same-sex marriage and even agreed that adoptions by gay people should be banned. Four years later, she doubled-down and went as far as suggesting that being gay is a choice.

Earlier this month Handel scoffed at Rep. Park Cannon, one of four LGBTQ state lawmakers, when Cannon tried to introduce herself and offer help on equality issues. On Thursday, Handel drew a red line on adoptions by LGBT people that pushed aside her “compassion” and made it clear her position on the issue is the same as it was in 2010.

Ossoff embraced LGBTQ supporters, received a hero's welcome at an HRC gala, told LGBT families he'll be their “staunch defender” and pledged to “forcefully” stand with gay Atlantans during an appearance at the Atlanta Equality March.

Cathy Woolard – a lesbian and one of several mayoral candidates that backed Ossoff – credited him with making “amazing gains” in an email to supporters late Tuesday.

No one ever said this was going to be easy. Jon Ossoff ran an amazing campaign and although the results aren’t what you and I may have hoped tonight, amazing gains were made in Georgia’s 6th Congressional District.

“This district was not supposed to be in play. Gerrymandering has stolen the power of the vote, allowing politicians to choose their people instead of the people choosing their leaders. Last year, we flipped Cobb and Gwinnett counties from red to blue. Make no mistake—there is a seismic shift on the horizon that will send shockwaves from the U.S. House to the courthouse. Georgians are ready for authentic leadership that believes in the best of us. We’re ready for Democrats to pave the way for a stronger middle class, affordable access to healthcare, and the strengthening of women’s rights. The Democratic Party is a party for everyone, and together, we are positioned to make history in 2018.”

Handel fills the House seat of Tom Price, who was tapped to head the U.S. Department of Health & Human Services. Price, like Handel, dissed LGBT people most every chance he had as a lawmaker.