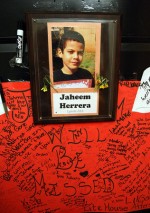 Jaheem Herrera’s 10-year-old sister discovered him hanging in his bedroom Thursday after his mother, Masika Bermudez, sent him to his room to settle down after arriving home from Dunaire Elementary School hysterical.

Bermudez (photo) tells WSB TV that her son faced anti-gay taunts, among others, and the she complained to the school.

Bermudez said her son was being consistently bullied at school. She said she had complained to the school, and she said it was her 10-year-old daughter who alerted her to the stress Jaheem was under.

“She said, ‘Ma, did you know they called Jaheem gay again today in school,’” said Bermudez.

Bermudez said bullies at school had called Jaheem “gay” and had taunted him about his accent. She said when he came home Thursday and she asked him about it, he denied it. She sent him to his room to calm down. That was the last time she saw him alive.

Other family members confirmed the anti-gay taunts in interviews with the Atlanta Journal-Constitution.

He didn’t want his sister to tell, either. She witnessed much of the bullying, and many times rose to her brother’s defense, Keene said.

“They called him gay and a snitch,” his stepfather said. “All the time they’d call him this.”

DeKalb County school officials refused to comment about allegations that Bermudez complained to the elementary school about the bullying. A “No Place for Hate” poster is displayed near one of the entrances to the school.

Herrera’s death follows the April 6 suicide of Carl Joseph Walker-Hoover, a 6th-grader in Boston who committed suicide after anti-gay bullying.

[Sirdeaner L. Walker] said that she contacted the school repeatedly over the last six months to ask teachers to intervene after learning her son had been targeted by students. Walker said her son’s classmates called him gay on a daily basis, made fun of his clothes and threatened to harm him.

Southern Voice weighed in on both suicides in a blog post this morning.

As with Carl, we have no evidence at this point that Jaheem actually identified as gay, and in many ways, it doesn’t matter. Both tragic deaths show the power homophobic taunts continue to hold, and the unfortunate truth that written “anti-bullying” policies, no matter how well-intentioned, aren’t worth the paper they are printed on if enforcement doesn’t reach down to the classroom and schoolyard level.

Fox 5 reports that other parents also complained to school officials about the taunting their children faced.

The hanging death of Herrera galvanized a group of parents from the boy’s DeKalb County school who said warning signs about constant bullying were missed or ignored.

Three hours after school let out on Thursday, Herrera was found dead in his bedroom closet.