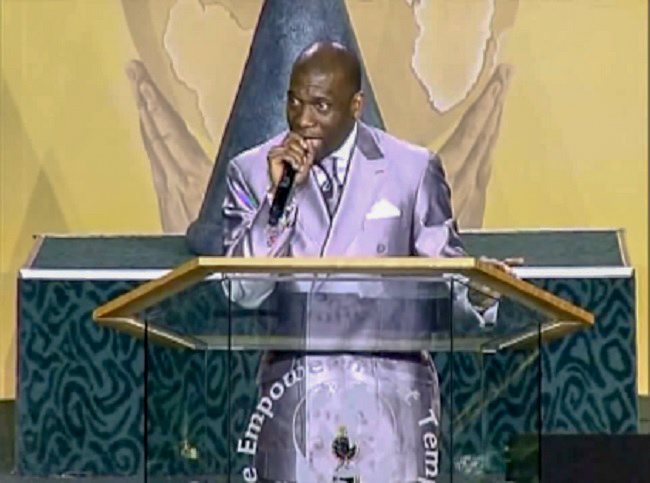 The newly-named leader of New Birth Missionary Baptist Church once compared homosexuality to drug addiction and called it a “rebellion” against God.

Jamal Bryant (top photo) was named the new senior pastor of the megachurch in Lithonia on Nov. 18, according to the AJC. New Birth is the church once led by controversial Bishop Eddie Long, who marched against gay marriage and was tainted by a sex scandal with several young men. Long died of cancer in 2017.

“We’ve got gay people in the pulpit, in the music department, in the dance ministry… but that doesn’t mean we stop preaching the gospel,” he told the congregation at Baltimore Empowerment Temple.

“We also got fornicators, also got gamblers, also got drug addicts, but you don’t see us doing a support group for them. Our responsibility is to make you uncomfortable in your sin,” he added. “Homosexuality is not the only sin, but it is a sin. It is not an alternative lifestyle. It is an alternative rebellion.”

The comments led St. Petersburg, Fla., Mayor Rick Kriseman to cancel plans to present a key to the city to Bryant for his work in the black community, according to Pink News. LGBTQ rights groups asked that Bryant’s invitation to the 30th Annual MLK Leadership Award Breakfast be rescinded.

Bryant also criticized President Barack Obama for coming out in support of marriage equality in 2012, saying he felt “jilted” in an editorial for the Detroit Praise Network.

The church at its core is to be a refuge for all of God’s children, including homosexuals. There is a gay community within the Black church. We can’t ignore them or bash them. However, the church has no shades of gray when it comes to marriage. Our faith reserves marriage for a man and a woman. President Obama, as a product of the Black church, is fully aware of that. Knowing this, the President made this endorsement without calling or preparing any of us. For many of us, it felt like a betrayal.

Bryant also worked “tirelessly” to defeat a marriage equality ballot initiative in Maryland in 2012, according to Huffington Post.

Bryant replaces Bishop Stephen A. Davis, who resigned in June. Davis took over as New Birth’s leader after Long's death.

The relationship between Bryant and Long goes back several years, according to the AJC. Bryant’s father used to preach during revivals at New Birth, and Long paid for the final two years of Bryant’s tuition at Morehouse.

“Bishop Long was larger than life to all young preachers,” said Bryant, who delivered his first sermon in Baltimore when he was 18. “I was not afraid of Bishop Long. I was an admirer and a fan.”

In fact, Bryant drew laughs Monday night at New Birth, when he talked about all the young preachers who used to try to emulate Long’s flashy style with his pumped-up biceps and tight muscle shirts and sleeveless jackets.