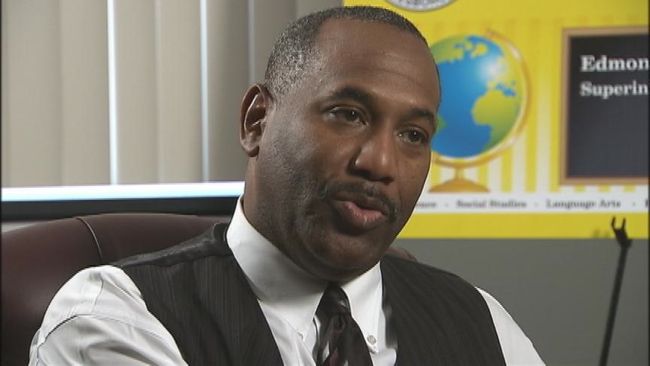 The Clayton County schools superintendent who quit his job in metro Atlanta expecting to be named chief of a school system in a progressive California city may now get dumped from that post over his past support for an anti-gay marriage initiative. Which just proves that you might wait to quit one job that pays $250,000 for another before you actually get hired. Tough lesson to learn for Clayton County Schools Superintendent Edmond Heatley, who quit that job in August – resignation effective Sept. 30 – when he was named the solo finalist for the Berkeley Unified School District superintendent’s job. Except for the pesky matter of Proposition 8, which in 2008 banned gay marriage in California and ignited a years-long court fight. When reports surfaced last week that Heatley backed Prop. 8 in a memo to his school board while superintendent in Chino Valley, Calif., parents and activists in liberal Berkeley sounded the alarm.

It is the “Background” section that tells us what we need to know about Dr. Heatley. In that section, Dr. Heatley presents an argument that is unmistakably intended to persuade the Board to adopt the resolution in support of Prop 8. For example, Dr. Heatley notes the number of jurisdictions that have passed laws opposing same sex marriage. And he notes that “only one other state” has recognized same sex marriage. There would be no point to these passages other than to persuade the Board that Prop 8 is in line with the national norms. He then repeats one of the most commonly-heard talking points from the Yes on 8 campaign, that defeat of the initiative would mean school districts will “inevitably be required to adjust their policies and curriculum” in response to a re-definition of marriage. Finally, he notes that the resolution “recognizes” – not “states,” or “claims” but “recognizes”– that “the ideal learning environment for children is within a nurturing home governed jointly by a mother and a father.” This is an argument in favor of the resolution. I don’t see how it could be read any other way.

Now the Berkeley school board has put Heatley’s hiring, expected as soon as next week, on hold. The board meets in a special closed-door meeting on Tuesday to discuss his fate. Heatley isn’t speaking to the press. If the Berkeley job falls through, it’s not clear whether Heatley will be welcomed back in Clayton. The system already named an interim schools chief, according to the Atlanta Journal-Constitution.

“He’s resigned from our position, and as far as I know, he hasn’t indicated a desire to come back and we’ve already hired an interim,” said Clayton school board chair Pam Adamson. When asked if the district would consider rehiring Heatley, Adamson said, “I don’t have a clue. Anything I’d say right now would be pure speculation. We’ve done what we needed to do, and now things play out.”

You can also lose your job for professing anti-gay views at Atlanta’s Interdenominational Theological Center. Just ask Jamal-Dominique Hopkins. Not supporting marriage equality can get you dumped from the lineup of speakers at the Democratic National Convention, too. Just ask Mayor Kasim Reed. UPDATE: Heatley withdraws his candidacy for Berkeley job. Photo via WSB