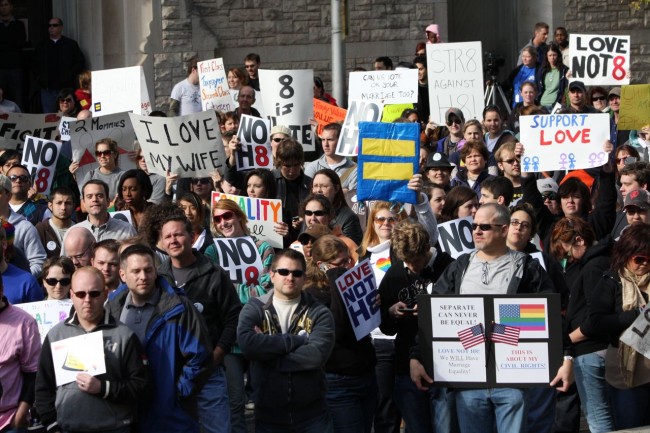 Gays in Atlanta love to rally. And it’s a good thing, too, as the national debate over same-sex marriage comes to Atlanta in August with a bus tour for marriage bigots.

LGBT folks here rally in their underwear over the Atlanta Eagle raid. They protest the Prop 8 decision at the Gold Dome and in Midtown. They hold hands and smooch for equality in Piedmont Park. They strip off their shirts in Midtown against homophobia. They carry signs and scream at Rick Warren. They picket malls at Christmas for equal rights. They do it when Fred Phelps and his clan come to town — twice. They even pull on purple dresses and run through Midtown. 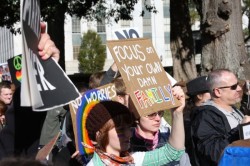 Yes, gays will gather — sometimes even in large numbers and with little clothing — for a cause. On Aug. 7, they will have yet another chance when the National Organization for Marriage brings its Summer for Marriage Tour to Atlanta at 2 p.m. Don’t be fooled — this group supports any ban on gay marriage and is coming to Georgia to celebrate the state’s two bans on same-sex unions.

The group kicks of its schedule of 22 rallies across the U.S. with an event in Maine on July 14.

Many of the states we’ll be visiting are key battlegrounds in this critical debate, as we work to organize grassroots support for marriage as the union of a husband and wife at both the state federal levels, building support for state marriage amendments and opposing the repeal of DOMA.

The group hasn’t announced a location for its Atlanta action, though you’d think the State Capitol would be a fitting scene. It’s there, after all, that state legislators in 2004 approved a constitutional amendment banning gay marriage and sent it to voters for their overwhelming approval.

But don’t fret, gay protester. There’s a chance you’ll have a counter-demonstration to join. Freedom to Marry, a group that supports same-sex unions, says it will crisscross the country to counter the Summer for Marriage Tour. The group hasn’t announced any firm plans for an Atlanta event, but is working with Georgia Equality to organize one.