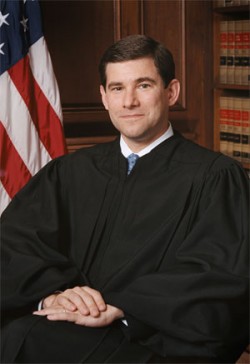 OK, anti-gay Judge Bill Pryor. Cozying up to transgender people is no way to get yourself appointed to the U.S. Supreme Court under President Newt Gingrich.

Pryor, the former swashbuckling attorney general for Alabama, blazed a trail of anti-gay views during his two terms. He didn’t back down as his nomination to Atlanta’s 11th U.S. Circuit Court of Appeals moved through the Senate in 2003, defending his comparison of the gays to “prostitution, adultery, necrophilia, bestiality, possession of child pornography and even incest and pedophilia” and his rescheduling of a family trip to Disney World to avoid “Gay Days.”

Apparently, seven years into a lifetime appointment has turned the conservative Republican Pryor soft. During arguments on Thursday in the case of an Atlanta transgender woman fired from the Gold Dome for being, well, transgender, Pryor strongly hinted that the state was wrong to fire Vandy Beth Glenn and that transgender people may be a protected class, legally speaking.

“We have direct evidence of intentional discrimination, it seems to me,” Pryor told Richard Sheinis, a lawyer representing the state of Georgia.

“You can’t discriminate against someone because they don’t behave the way you expect them to behave because of their sex,” Pryor added.

But wait. It gets better, according to the GA Voice.

Richard Sheinis, representing the state, argued that if Glenn was to win this case, transgender people would become a “protected class.”

Pryor told Sheinis if he wanted to change the outcome, he should “go talk to Congress.”

The state of Georgia has lost this case once, when in July 2010 U.S. District Court Judge Richard Story ruled that the firing was illegal and that Glenn’s employer violated the Constitution and discriminated against her for failing to conform to sex stereotypes. Glenn was sacked when she announced plans to transition from male to female following a diagnosis of Gender Identity Disorder.

The state appealed that decision, and now after arguments Thursday, seems poised to lose again.

“No one wants to make predictions based on oral arguments,” Greg Nevins, supervising senior staff attorney in Lambda Legal’s Atlanta office, says. “Their questions showed keen appreciation for what happened to Vandy Beth and we are hopeful for the best.”

As for Pryor, he probably shouldn’t expect calls anytime soon from his soon-to-be former Republican friends looking for names to add to their short list for the next Supreme Court vacancy.