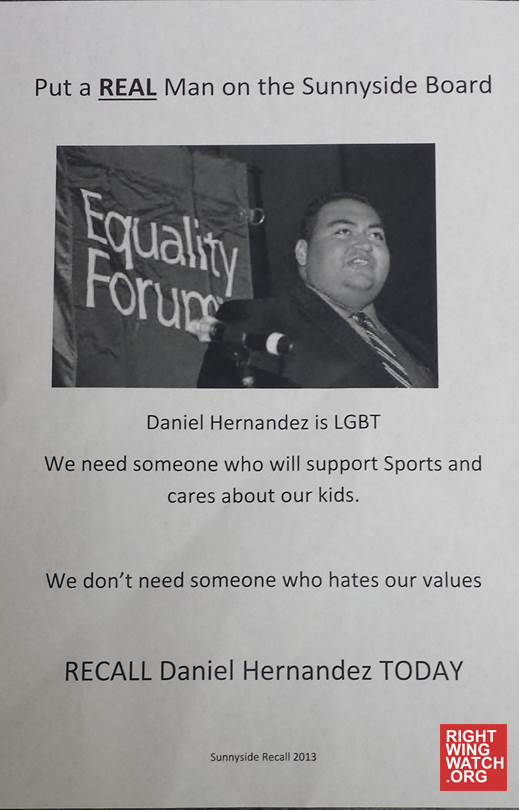 Being a gay hero, and now an elected school board member, isn't providing cover for Daniel Hernandez. As he prepares to help lead the Atlanta Pride parade in October, he's fending off political opponents armed with an anti-gay flyer.

In 2011, Hernandez was celebrated as the intern who helped save the life of U.S. Rep. Gabrielle Giffords during an assassination attempt. Now, elected to the school board in Sunnyside, Ariz., he's mired in the muddy trenches of the a recall effort by political opponents. Their latest salvo? A flyer attacking him for being gay:

A second flyer attacks Hernandez for his efforts on gun violence prevention.

As the flyers gained national media attention, recall organizers started backing away from the anti-gay flyer. But not Hernandez.

“This is the worst kind of politics,” he told BuzzFeed on Tuesday. “It’s completely repugnant that in 2013 someone thinks its OK to put up negative flyers like this. Even worse, now they’re walking it back and saying they had nothing to do with it.”

Atlanta Pride tapped Hernandez, along with gay playwright Del Shores and lesbian Sheriff Lupe Valdez, as honorary grand marshals of the Oct. 13 parade. They will join seven other LGBT activists and allies named as grand marshals.

“I am honored to help celebrate and honor the gay, lesbian, bi-sexual and transgender community in Atlanta,” Hernandez said when Atlanta Pride announced its honorary grand marshals.