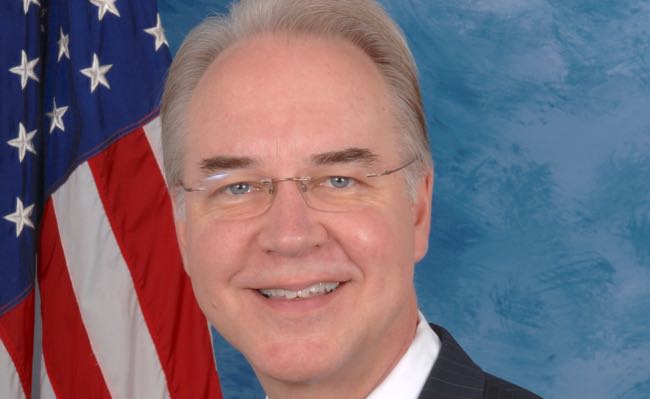 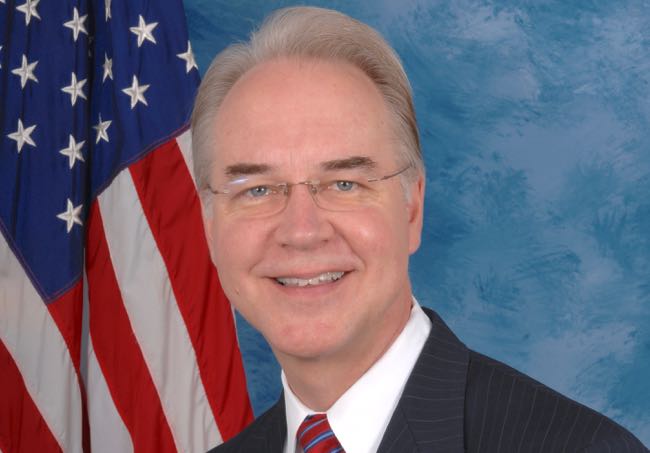 A metro Atlanta member of Congress who has opposed LGBT equality efforts every chance he's had during his political career has been tapped as President-elect Donald Trump's choice to head the U.S. Department of Health & Human Services.

U.S. Rep. Tom Price – whose 6th District includes portions of DeKalb, Fulton and Cobb counties – has called federal guidelines about the treatment of transgender students “absurd,” lamented that LGBT people are “outside the norm,” backs anti-gay “religious freedom” legislation, called the legalization of gay marriage “a sad day for marriage,” and supported former Atlanta Fire Chief Kelvin Cochran, who was fired over his misogynist and anti-gay book that equated homosexuality with pedophilia and bestiality. He's also besties with a rabbi who blamed a hurricane on marriage equality laws.

Price has maintained an endless fight against LGBT equality throughout his 12 years in Congress. Via Human Rights Campaign:

Price (R-Ga.), who would lead the 80,000-person Department of Health and Human Services, has earned a score of “zero” on the past three HRC Congressional Scorecards, and is fiercely opposed to the Affordable Care Act, which extends vital protections to LGBTQ people in heathcare settings. In the 114th Congress, he did not support the Customer Non-Discrimination Act, which would protect LGBTQ people from discrimination from healthcare providers. As recently as 2013, he has also spurriously claimed LGBTQ rights had a negative health impact; opposes a woman’s right to choose; and voted against funding for Planned Parenthood. NPR reports that Price has also “voted against legislation aimed at prohibiting job discrimination based on sexual orientation; for a constitutional amendment to define marriage as between one man and one woman; and against the bill that would've ended the don't-ask-don't-tell policy regarding disclosure of sexual orientation in the military.” Read more here.

Once in Trump's Cabinet, Price is likely to lead the dismantling of the Affordable Care Act, which carves out non-discrimination protections for LGBT people. Via Huffington Post:

Democrats and the Obama administration took unprecedented steps to address these problems, including carving out nondiscrimination protections through the Affordable Care Act. If the health care law is repealed ― an action Price has supported ― many of these protections would likely go away. But even if the law stays on the books, the Trump administration could choose not to prioritize enforcement of LGBTQ protections, or to go further and try to change the rules.

The Affordable Care Act has a nondiscrimination provision, for example, that the Obama administration has defined to include gender identity and sex stereotyping. But the language does not explicitly state whether discrimination based on sexual orientation alone is included in that provision. The Trump administration will have leeway in deciding how to interpret this.

Robin Maril, associate legal director for the Human Rights Campaign, said people are concerned the new administration could chip away at protections “by not enforcing them, or undermining them with exemptions.”

As HHS secretary, Pride would oversee nearly a dozen agencies including the Atlanta-based Centers for Disease Control & Prevention. The agency funds HIV efforts through grants to state health departments and is a leader in research on HIV and other STDS that impact LGBT people. That concerns LGBT health advocates, according to PBS.

Trump’s agenda has progressives worried about the possible rollback of health services for gay people.

“It’s an agenda that destroys the national health safety net,” says Matt Kavanaugh, a seasoned health policy activist with the Global Health Access Project, which campaigns for drug access for people with HIV across the globe. “We have a lot of people with HIV who depend on these programs.”

He’s particularly worried about a shift in Medicaid to block grants awarded to states, which could spell cuts in HIV programs — something seen in the 1990s. Before the ACA extended health coverage of expensive anti-retroviral drugs, those with HIV relied on the federal AIDS Drug Assistance Program (ADAP) to gain access to medication. But state-administered ADAP programs were plagued by budget cuts, creating long waiting lists for drug access.

“One of the most important things that happened with Medicaid expansion is that people were able to move off of ADAP and not just get HIV drugs but full [health] insurance,” Kavanaugh says. “If that rolls back, it’s likely we will see huge problems with ADAP.” That in turn could hurt the U.S. effort to control HIV, he says.

“Price’s hateful record on LGBTQ issues shows that he lacks an understanding of basic human rights and dignity,” said Sarah Kate Ellis, president and CEO of GLAAD, an LGBTQ advocacy organization. That record renders him “completely unfit for secretary of Health and Human Services,” she added.

UPDATE | Georgia Equality reacted to the selection of Price, citing his anti-LGBT track record while also praising his work on HIV funding during his time as a state senator. Price, a physician, served as a state senator for four terms from 1997 to 2004.

“You would be hard-pressed to find a more alarming or inappropriate pick for HHS than Tom Price. If confirmed, we would have a HHS Secretary with a lengthy record of hostility toward women, the LGBTQ community, and those in dire need of affordable health care. Price’s career of division and extremism casts serious doubt on his ability to protect the health and welfare of all Americans without bias.” – Michael Smith, Communications Director