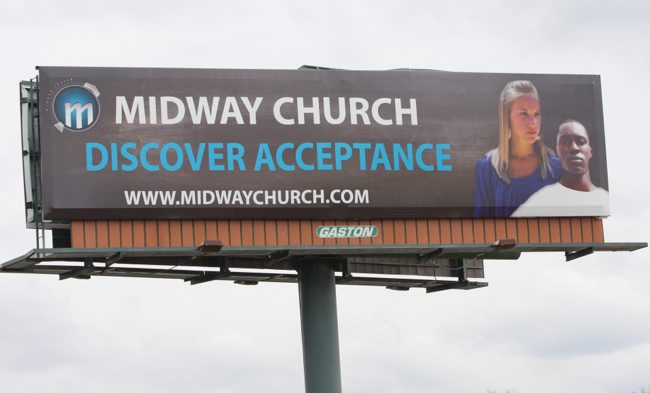 Acceptance is a tough thing to come by, especially if you’re gay. But a metro Atlanta church wants to pull a bait-and-switch that won’t turn out so well for LGBT parishioners lured in with their warm and fuzzy advertising. Midway Church in Villa Rica, with the help of a highway billboard, hopes to convince passers-by that they welcome acceptance. “Discover Acceptance” blares the billboard on Carrollton Villa Rica Highway, not far from the church campus. Turns out, this is the same place that hosted the “Love Won Out” conference from Exodus International last week. You know, the “pray away the gay” folks. The Feb. 18 conference prompted a group of about 50 protesters (photos and video) to gather their signs and bullhorns to counter a message they took delight in calling junk science. The conference also prompted ex-gay survivor Chaim Levin to speak out (video) during a press conference in Atlanta. Sadly, this billboard may convince LGBT people to try out the church. How soon before they discover Midway’s bastardized version of “acceptance” is more about changing their sexual orientation than welcoming them with open arms?