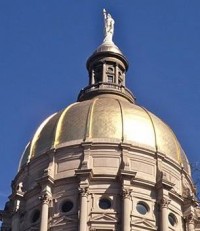 A bill to toughen the state’s anti-bullying law, nearly dead just a few days ago, resurfaced Tuesday at the Gold Dome and gained approval from the state House.

The measure from gay-friendly state Rep. Mike Jacobs — originally known as House Bill 927 — was successfully amended to a Senate bill and then approved by the House in a 119 to 45 vote. S.B. 250, from Republican Sen. Bill Hamrick, addresses disruptions on schools buses and now goes back to the Senate for a second vote.

Jacobs could not be immediately reached on Tuesday afternoon. Jeff Graham, Georgia Equality’s executive director, declined comment on the amendment and vote. Georgia Equality has called passage of Jacob’s bill a top priority for the legislative session.

The measure was near death after failing to gain a House on Friday, which was the 30th day of the 40-day legislative sessions. Most bills that aren’t approved by one chamber of the General Assembly by then are considered dead.

The Young Democrats of Georgia Stonewall Caucus lauded the passage of the anti-bullying bill as past of the larger Senate legislation.

“While we are displeased that the bill does not have LGBT exclusive language, we are content knowing the increasing problem of discrimination will be dealt with across the board legislation,” Edward Thornton III, the Stonewall chair, says in a press release. “The passage of this bill marks a great moment for the LGBT community, as this is the only piece [of] legislation on the slate for the 2010 legislative term that will directly affect members of our community on the basis of sexual orientation and gender identity.”