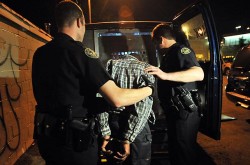 On Ponce de Leon Avenue, undercover officers outhustled a hustler offering sex for $20 during their Operation Summer Heat. Turns out, just a few blocks away in the pay-for-gay popular area of Cypress and Eighth streets, the cost skyrockets.

A cop itching for some oral gratification there had to pull out a cool c-note before his new friend would put out. Either way, Andrew Jackson or Ben Franklin gets you busted during this sting.