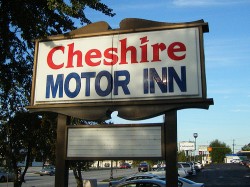 When you’ve knocked back one too many and your night with a friend ends prematurely on Cheshire Bridge Road, try and remember to shut your motel room door.

The Loaf’s Blotter Diva takes it from here:

On a recent Friday night, a 33-year-old man from Augusta said he was too drunk to drive, so he and friend took a taxi to a motel on Cheshire Bridge Road. The man said he went to sleep after putting his watch on the nightstand. He said he left the door to the room wide open (always a good idea at a motel on Cheshire Bridge Road) and that during the night, someone must have entered the motel room and stolen the watch. Apparently, the man and his friend were mighty drunk, because neither one heard a thing during the alleged robbery. Nothing else was reported missing from the room.

Leaving your room door ajar? Uh-huh. It’s a bit of a tradition at this place. But it doesn’t take an open door for a booty call to end badly here. Just ask the other drunk, who passed out during his, ahem, date only to later discover that he was missing more than his pride.

Oh, Cheshire Bridge Road. There was that fateful taxi cab ride. And the guy who fell off the wagon at a gay bar and right into the ass end of another car.