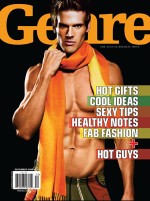 In a development that can’t be good for two local gay publications, Genre magazine said Friday that it’s suspending publication.

The announcement from the gay glossy, which is part of the media company that owns the publishers of Southern Voice and David Atlanta magazine, is another sign of the shaky ground under the publications. Company CEO David Unger says Genre is shutting its doors due to the recession, which has claimed scores of newspapers and magazines across the country.

But the announcement comes as the company is in federal receivership, Unger is apparently being investigated by the feds and the publications are putting out fewer pages with less resources. Freelancers, too, are suing to get their past due payments.

Despite all of that, Unger put a positive spin on the Genre closing in statement carried by Southern Voice:

“We thank all of our readers, advertisers and editorial staff for their support throughout our more than 16-year history and hope that we can re-establish our relationship when times are better,” company CEO David Unger said in a statement.

He noted that the decision to suspend Genre does not have any impact on other publications produced by HX Media, Window Media or Unite Media, which include the Washington Blade, Southern Voice, South Florida Blade, New York Blade and HX magazine.

“Those publications will continue to publish and support their local communities,” Unger said.

Queerty, which relishes in poking and prodding the media company, was more than happy to revisit this now-laughable (and probably laughable when he gave it) statement from former Genre editor Neal Boulton:

SAD LOL MOMENT: Just before walking off the job, then-Genre editor Neal Boulton assured us in January, “Judging from our high sell through and success on the newsstand, Genre is very much in demand so I plan to keep supplying that demand.” And then he told Gawker (emphasis ours): “This is the problem with blog responses. They set aflame raging rumours. Genre is NOT only NOT closing, but it is experiencing record growth, the addition of a new bright team of staffers, as well as an increase in circulation, and advertisers across many key categories. What’s more, Genre, unlike it’s competitors, who seem to be staggering around the competitive set looking for help, is walking taller and stronger than ever before. Mark my words: Genre will be an irrepressible force in publishing, so stay tuned!”