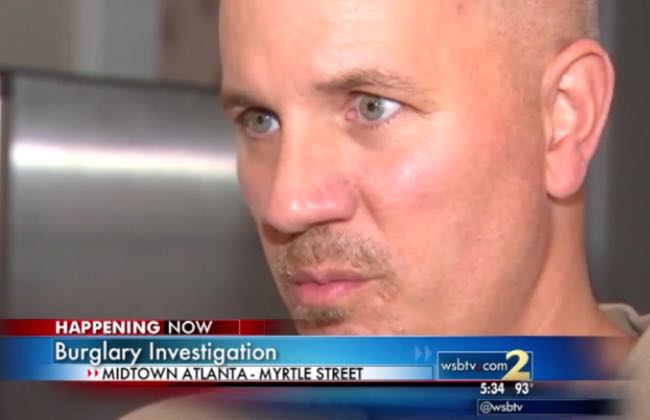 The home of a gay Atlanta writer and philanthropist was burglarized last week while the homeowner slept upstairs, the most recent in a string of disturbing incidents involving LGBT victims in Midtown.

The burglar walked into Will Pollock's home on Myrtle Street on Tuesday about 3:40 p.m. after prowling at the rear of the home. The suspect snatched four Apple laptop computers while Pollock slept upstairs, according to an Atlanta police incident report.

“It does feel like a violation,” Pollock tells WSB, which reported the incident on Monday. “I'm speaking for my entire neighborhood to say enough.”

The suspect didn't force his way into Pollock's home, according to the incident report. Doors to the home were left open and the key to the front door was left inside it.

Pollock tells police that he was upstairs when the incident happened, but the security cameras captured images of the suspect outside the home.

“Mr. Pollock stated that he was at home when the incident happened, but was sleeping upstairs and had a noise machine running to drown out the noise being made by some construction workers that were working on his home,” according to the incident report.

The burglary is one of a several recent incidents within blocks involving crime victims who are gay. On Wednesday – a day after Pollock's home was burglarized – two armed men robbed Matthew Jones as he stood just feet from the front door to his apartment on 8th Street. The robbers returned later to steal Jones' vehicle. On June 9, Mamdouh Shawky and Cory Fain were robbed and pistol-whipped in Midtown. The men were walking from Caribou Coffee on Piedmont Avenue to the Eagle.

Just as Jones did, Pollock says his home burglary should serve as a wake-up call to Midtown dwellers.

“We gotta have one of those network moments where we say, 'I'm mad as hell and I'm not going to take it anymore.' And I feel like this is a great opportunity for us to speak as one,” Pollok tells WSB.