Annual Backpack in the Park set for Sunday 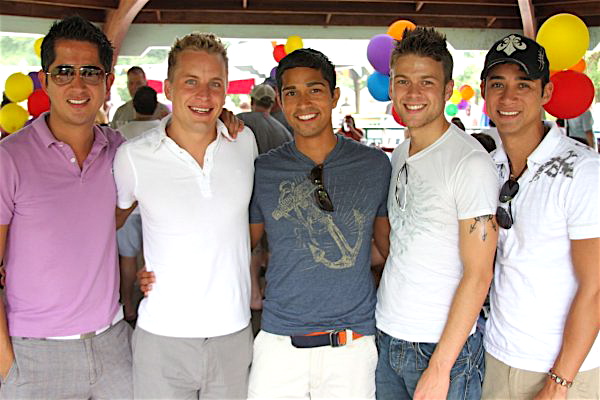 The gays come out in droves each year for Backpack in the Park. Organizers are ready with a carnival-like atmosphere and a heartfelt mission for Sunday’s 2010 event in Piedmont Park.

The fifth annual event comes courtesy the do-gooders at For The Kid In All of Us, the same group that throws the wildly popular Toy Party each holiday season to benefit kids who may not get presents under their trees. For The Kid expanded the concept to host its back-to-school benefit that collects backpacks filled with school supplies for underpriviledged kids.

“It’s about bringing together different communities within this great state all with a common goal which is to help underserved children in Georgia,” says Jorge Esteban, board chair with For The Kid. “Our two annual events are a testimony as to what can happen when people with a common goal get together.”

Since its inception eight years ago, For The Kid has raised $450,000 in cash and collected more than 27,000 toys during Toy Party. In half that time, Backpack in the Park has distributed more than 3,700 backpacks.

Carnival games plus free drinks and food are yours for the entry fee of one $30 gift card for supplies, or one new, unwrapped backpack with a specified list of school supplies. For the Kid also struck a new partnership for this year’s event with Charitee Heart to supply pre-filled backpacks, but those had to be purchased by Friday. The company is donating 10 percent of each purchase to organizers.

“We are super excited about bringing back the event to its roots at Piedmont Park where it was first held five years ago,” Esteban says. “This time around, the event will be held the Greystone facility within the park. Lots of fun and games plus air conditioning is a huge plus.”

Sound like fun? It is. Check out our photos from last year’s Backpack in the Park.

In 2009, it was held in Grant Park due to drought restrictions. It soared past the goal of 1,200 backpacks and ultimately prepared 1,600 kids for their first day of school. They hope to exceed that number this year.

“One of our main goals this year as to increase donation channels and making it easy for folks to support the event,” Esteban continues. “We increased to 23 backpack drop-off locations across Atlanta, as well as several huge corporate campaigns that help raise additional backpacks.”

You know you’re gaining steam when corporate juggernauts like Newell Rubbermaid, AT&T, Home Depot, IHG and Banana Republic chip in for the cause.

For The Kid In All Of Us is the brainchild of gay Atlanta City Council member Alex Wan, who started Toy Party in his own home way back before he was an elected official to be reckoned with. He appeared on “Good Day Atlanta” Thursday to lend his powerful support to the event. Here’s the video: