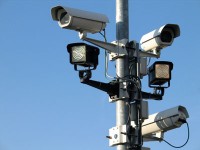 At least Anne Fauver is doing something in the waning months of her political career. But it’s what she is doing that’s troubling. First, it’s taxis and now it’s cameras in Piedmont Park.

You might expect the Atlanta City Council’s lone gay rep to take the lead in speaking out about the police department’s Sept. 10 raid at the Eagle. Or speaking publicly about it at all. Nope, she can’t be bothered.

You might have expected her to play a central role in negotiating the return of the Atlanta Pride Festival to the park. Nah, that was Lisa Borders.

Instead, she’s spending her remaining months on the council going against her colleagues on the age of taxis trolling the streets for fares — that pressing issue that’s overwhelmed the city’s other problems, such as financial mismanagement, police furloughs and property taxes.

And now? She wants to partner with the Piedmont Driving Club to install six cameras in Piedmont Park.

By the way, Fauver hasn’t spoken publicly about the murder or the stabbings. But now, according to the Atlanta Journal-Constitution, she wants to spend some of her council budget to install the cameras.

Councilwoman Anne Fauver, whose district includes the park, wants to take $49,113 from her council expense account to pay for three cameras. The other three would be funded by the Piedmont Driving Club.

The cameras would provide better security in the park, supporters say.

The council is expected to vote on the measure Monday.

At first blush, the proposal may seem like a helpful idea. But take another glance — the cameras need to be monitored and with the recent high-profile incidents taking place at night, it’s questionable whether the cameras will be able to capture anything in the dimly-lite park. There’s also an element of Big Brother involved.

And partnering with the Piedmont Driving Club suggests that at least three of the cameras — if not all of them — will be placed to benefit the private club. That continues a disturbing trend of the city ceding control of the crown jewel of its park system to private hands. The park’s caretaker is the Piedmont Park Conservancy, which pushed for the ejection of large-scale festivals only to make room for a massive Paul McCartney concert this summer to raise money for — who else? — the conservancy.

How about a solution that will actually benefit — and protect — the park’s public fans? Take the staff that will be forced to sit and watch the feed from the cameras and have them patrol the park. Better yet, put the police department’s Red Dog unit — the ones accused of manhandling, using profanity and uttering slurs during the Ealge raid — on patrol in the park. There’s actual crime taking place there.

As for Fauver, whose second term ends in December, she should try to step up for the LGBT constituency and stop tilting at windmills.