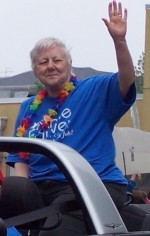 About 20 gay folks crashed the Atlanta City Council’s Public Safety Committee meeting Tuesday to amplify the growing chorus of criticism over the Atlanta Police Department’s Sept. 10 raid of the Eagle.

Here’s what we learned from the meeting:

• Anne Fauver (photo), the lackluster lesbian District 6 rep on the council, is so nonplussed by the incident and the eight arrests that she left the meeting early. (She’s one of six committee members.) In fact, she’s been eerily silent on the entire matter. No public statement. No call for an investigation. Nothing. Longtime activist Floyd Taylor called her on the lack of action during the committee meeting, to which she responded with, “I’m in your court.” Then she left. (SoVo)

• APD Deputy Chief Carlos Banda says the Eagle wasn’t targeted because it’s a gay bar. In fact, he adds, APD has carried out its thuggish raids at six other places in the last several months — Pleasures, Gold Rush, the Candy Shop and Playground in Southeast Atlanta, Foxy Lady on Moreland Avenue, and the Masquerade on North Avenue. (Loaf)

• Banda also says the vice squad kicked off its investigation of the Eagle in May, but put it on the backburner over the summer when police “were dealing with high incidents of retail theft and gang violence.” Does that mean it’s safe to assume that on Thursday, when the Eagle raid took place, retail theft and gang violence had all but been stopped in the city? (SoVo)

• It might be December or January before APD’s internal affairs unit completes its investigation into the 9 complaints filed Monday (or 10 or 11, depending on which news account you read). That could well take it into the administration of the new mayor and a new police chief. (Loaf)

But really, the exchange between Taylor and Fauver is noteworthy — and telling of Fauver’s two terms on the council — that it’s worth hitting a second time.

Anne Fauver, the only openly gay member of the City Council, has been silent on the issue. Fauver, who is not running for reelection, informed those wanting to voice their opinions about the police raid that she had to leave the meeting early, but invited them to email her or call her office.

Fauver glared at Taylor and answered again that people could email her. “I’m in your court,” she said.

Fauver did point out there is a Citizens Review Board for the APD, created by the City Council as a resource where citizens can also make complaints of alleged police misconduct.

Fauver, by the way, is retiring after two terms. Six candidates, including three gay men, are hoping to replace her.

What the committee hearing didn’t answer and something we still want an answer to is this: What happened to the $150 officers reported spending during the raid?

Sure, the nine undercover officers had to pay the $5 cover. But that totals $45. Where did the rest go? Were the undercovers knocking back a few brews on the taxpayer’s dime before they forced 62 patrons to the ground and left them there in handcuffs for up to an hour?