Angry gay man judges ‘Manboys’ and everyone but himself 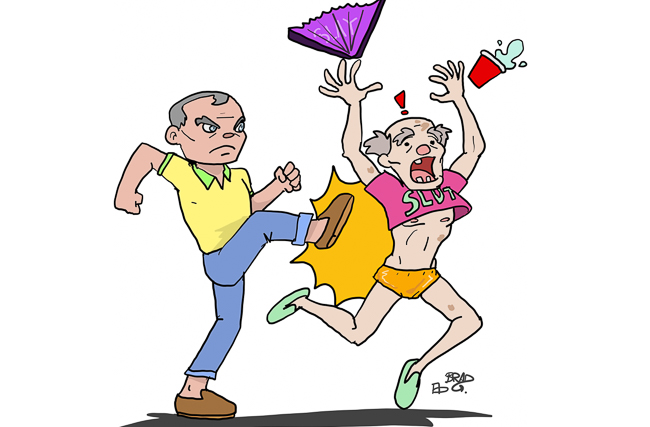 Recently, the Q magazine advice column suggested 'Manboy' stop policing friends and work on himself. We struck a nerve with a reader showing 10 times the affliction.

Wow. I just read your response to “Manboy,” and I’m incensed. He’s growing up while his friends remain stuck in the same old gay bar routines, but you told him not to judge them and not to “throw the friends out with the booty shorts.”

Gay Peter Pan syndrome is real, and people who go out all the time, drink too much and date anything that moves are what’s wrong with this community. If Manboy doesn’t get away, he’ll end up just like them — alone and sad.

You made his problem about him, when it’s clearly about the people in his life who need to get it together. They’re the ones that needed your help, and you left the real issue hanging.

Hey, Manboy, there are other real men out here who feel the way you do about those loser bar flies, and we’re here when you’re ready!

We agree on one point: Wow. The stench of your superiority complex is overpowering.

We get it: hurt people hurt people. That much sanctimony covers deep pain and a lack of self-awareness. Maybe we struck a nerve because you saw some aspect of your own life reflected in the premise. Since you either didn’t read the column closely, or worse, tortured yourself hand-picking the bits out of context that would infuriate you the most, let’s review.

The response was about Manboy because he was the one asking the question. The original response did acknowledge the existence of Gay Peter Pan Syndrome, and if someone wrote in for help as a victim of it, that’s who our response would have addressed. Also there was no indication that any of his friends felt “alone and sad.”

We advised Manboy to let other people deal with their own stuff while he deals with his. He raised concern over his own drinking and relationship history, and we offered a way toward change. The column also acknowledged that he might grow apart from his friends over time, but that there’s no reason to abruptly cut off meaningful relationships in an effort to solve his internal conflicts.

When Manboy cast a judgmental eye on his friends, at least it was with some love in the context of years being good to each other. You’re just being mean — to Manboy’s friends and to anyone who doesn’t fall into your narrow definition of “real man.”

Just like Manboy, though, the time you spend on what others could do to your liking is time missed addressing your own issues. Each person’s problems are ultimately theirs alone to handle. Nothing other people do, and everything we each face as individuals, is about us.

Looking at our own crap and learning not to judge others may be an even bigger sign of growing up than any of that other stuff.

I’m 22, and it feels like everything was easier not that long ago. I work my ass off but don’t get paid accordingly. I am talking to several people, but I can’t find anyone to really love. I battle internal demons with nobody else in my corner. Being a grownup sucks.

Every person you know has shared every one of your concerns at some point. It’s not easy being anybody in this world, so at least you’re in good company.

Your childhood doesn’t seem that long ago because it wasn’t. Time will help.

The bad news is that life gets harder. The good news is that you get way better at dealing with challenges. Keep your eyes open, keep moving forward, and keep your good friends close.

A version of this column originally appeared in Q magazine. Read the latest issue online here:

Read the entire archive of The Q advice column here, and pick up a new edition of Q each week at LGBTQ and queer-friendly venues around town.