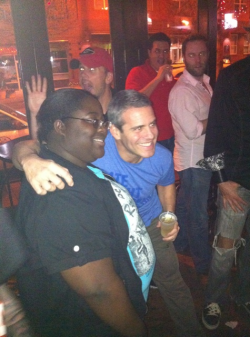 What’s a fab gay TV executive to do after a long day of recapping all the “Real Housewives of Atlanta” drama with the ladies themselves? Do not pass “Go.” Head directly to Blake’s on the Park. That’s just what the Bravo VP and “Watch What Happens Live” host did on Thursday night. What Now Atlanta? gay blogger and founder Caleb Spivak tweeted a pic he snapped at the gay Midtown hotspot (photo). Check out that guy behind him. Anyway, Atlanta’s favorite HRC guest was spotted mugging it up for fans with requisite cocktail in hand while in town corralling – as best he can – the dynamic, often explosive personalities on the guilty pleasure show. Cohen hasn’t leaked what’s to come out of the sessions, but you can bet it’ll be juicy. What with Marlo’s “faggot” apology tour in full swing even after she denied then lied about saying it, Phaedra’s recently revealed insurance scam drama, gay-loving, spinoff-enjoying Kandi calling Kim a racist liar, the April debut of Kim’s own spinoff, good ol' Sheree instigating and stirring the pot to include Cynthia, and jealousy over NeNe’s budding relationship with Kim Kardashian. And plenty of that is new since the season wrapped! Suffice it to say there’s a lot to talk – and fight – about, and neither Cohen nor our girls are afraid to let their stances be known. You’d need a drink at Blake’s too. Or a big gay vacay. Cohen tweeted this Friday afternoon: “Me and #WWHL are on vacation for a week. Gonna miss the clubhouse but excited for some sun and sleep!!” Where to? “an island -hopefully with no Internet!”