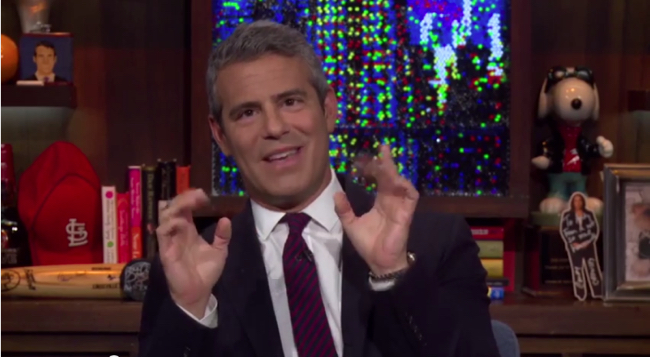 When it comes to the plentiful gays on Bravo, no gay is any gay without a nod from executive Andy Cohen. That’s why a public rebuke from him on gay issues makes even snotty “Real Housewives” take notice. Sort of.

A figurative five minutes after he lifted his landing gear to leave gay Atlanta's Swinging Richards, the out author, programming guru and talk show host is back on our gaydar, this time with Lance Bass. The former boybander and current Southern marriage equality poster boy was a guest on Cohen’s “Watch What Happens Live” last week, and the finger-wagging, neck-snapping and tongue-clucking hit fever pitch over a recent “Housewives” episode.

It seems too much use of “the gays,” “these gays” and “my gays” and “your gays” was the straw that broke these gays’ backs for the whole “Housewives” franchise.

Hearkening to past Atlanta gay foibles, Cohen dresses down his “Beverly Hills” cast for acting as if gay friends are there for the women’s entertainment.

“You do not own them,” Cohen said (video above). “We are not cattle; we are not purses.”

It’s Cohen’s job to keep his Bravo franchise in the spotlight, so dressing down its stars makes him look like he’s in charge and on top of gay issues while also accomplishing the attention he seeks. In the clip, Cohen calls himself “Boss Gay” and runs a pretty gross video cutting together many (many!) uses of the phrase “my gays.” Then he ends on a softer note that shows where his real allegiances lie.

“We are good at reading, so consider yourselves read,” he says blowing a kiss. “I love you.”

Ugh. Nice try. Whatever.  It’s the latest in a long line of Cohen “scolding” his stars for treating gay friends like objects. Does he take no responsibility for the monsters he helped create?

In Atlanta, Cohen has taken cast members to task for their gay-baiting and queen slang to much fanfare but little change in the end. We’ll just put this latest diatribe in the basket with “pushing” Tyler Perry on coming out and “convincing” Atlanta gay Danny Roberts to admit shagging a straight guy on the “Real World.”

Of course, Cohen continues to ignore the real gay stereotypes perpetuated on his whole franchise and its Atlanta spinoff “Fashion Queens.” Guess we’ll have to do some scolding of our own the next time he hits town to shoot a “RHOA” reunion special, pitch one of his books, pick up an award or eat at Chick-fil-A. (Bad gay!) He's even knocked back cocktails at Blake's.