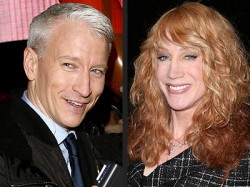 CNN is turning to the gays for salvation on New Year’s Eve. The network is again adding gay-loved Kathy Griffin to spice up its New Year’s Eve show anchored by openly closeted Anderson Cooper. CNN takes on Griffin despite her potty-mouthed performance last year, and she takes on CNN despite its ratings slide into the toilet. Last year, Lance Bass joined the Cooper-Griffin duo to make it an over-the-top gay affair. Cooper had this to say about the Griffin pairing: “It’s often bitterly cold, and yet after being with her for a few minutes on live television, I find myself drenched in sweat.” Mostly because he’s nervous that Griffin’s mouth will pull him out of his quasi-closet. But the New Year's Eve special could also be a boost to his goal of becoming the new queen of daytime talk next year. Or just to show off his big guns. What could make this pairing more gay? If they brought on Bravo’s gay programming exec Andy Cohen and NeNe Leakes from “The Real Housewives of Atlanta” to talk about boxers or briefs. Mmm, Cooper in briefs. That’s so gay.